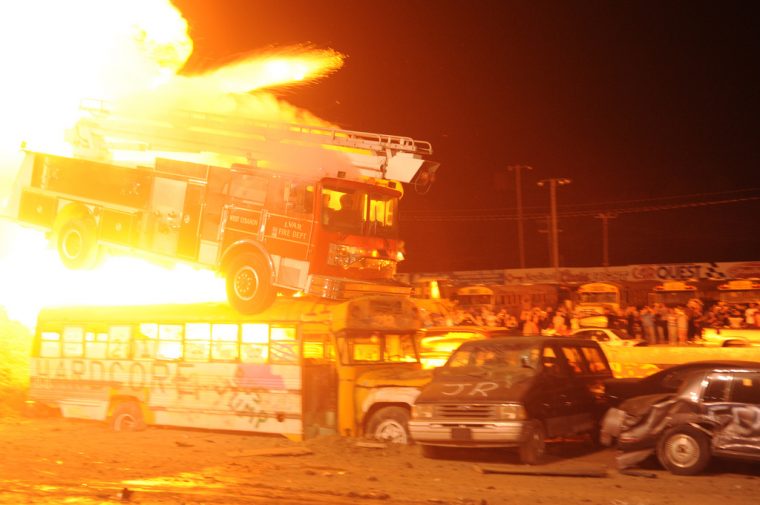 Stunt driver Rocky Hardcore drives a firetruck over a school bus at the 2011 “Eve of Destruction” thrill show
Photo: Chuck Miller via cc/Flickr

Driving a car normally takes a lot of skill … and driving a car to perform stunts takes incredible skills. While motorsports drivers are admittedly talented for precisely operating and maneuvering fast-moving vehicles, it takes a level of control and precision rarely seen to perform dangerous stunts. That’s why these eight daredevil drivers deserve to be recognized.

Don’t Be a Daredevil! How Toyota’s cutting-edge safety technology keeps you protected

Joie Chitwood: A racecar driver from Texas who competed in the Indy 500 multiple times, Joie Chitwood gave up his racing career to run the Joie Chitwood Thrill Show, which toured for 40 years. Chitwood set a world record by driving a Chevette on its two side wheels for 5.6 miles. 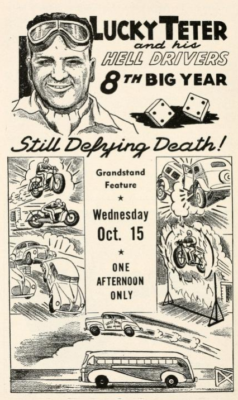 Eddie Kidd: A stunt-double for multiple James Bond actors and a world record-holder for jumping over lines of buses, Kidd has the reputation of being one of the best motorcycle stuntmen ever. Unfortunately, an accident in 1996 led to serious brain damage and paralysis, and he’s spent his later years in charity work.

Kitty O’Neil: Multi-talented daredevil Kitty O’Neil was a stunt-woman on TV shows like Wonder Woman. Additionally, she performed a variety of driving stunts for shows and broke land speed records, exceeding 512 mph in her 1976 attempt.

Scott May: Along with his currently touring team of drivers in his stunt show, Scott May wows audiences in the U.K. with this ability to dominate a variety of vehicles, including driving a 7.5-ton truck on two wheels.

Ken Carter: The Canadian-born daredevil dropped out of school to perform car stunts, honing his skills to start a travelling act as The Mad Canadian. His multiple attempts to jump rivers and ponds in rocket-powered vehicles led to many injuries, including his death when he overshot a landing ramp. The documentary The Devil at Your Heels chronicled his feats.

Lucky Teter: Familiar with cars as a gas station attendant and test driver, Earl Teter formed the “Hell Drivers” crew in 1934, the first travelling auto thrill show. He pioneered stunts like jumping from ramp to ramp over large buses (which sadly claimed his life in 1942).

Evel Knievel: The man who’s name is synonymous with daredevil driving stunts, Robert Craig Knievel Jr. attempted over 75 ramp-to-ramp jumps and was inducted into the Motorcycle Hall of Fame. Inspired by Joie Chitwood, Knievel mastered motorcycle performance to support his family, and his skills quickly led him to global fame.

Robbie Knievel: The son of Evel Knievel, Robbie followed in his father’s footsteps and is also a motorcycle daredevil. He has broken 20 world records and made more than 350 jumps, including one in a challenge against Eddie Kidd (pre-injury).

Pushing the Boundaries: Ford reaches for the future with Sync 3