Adam Levine to Make Sweet Music from a Nissan GT-R 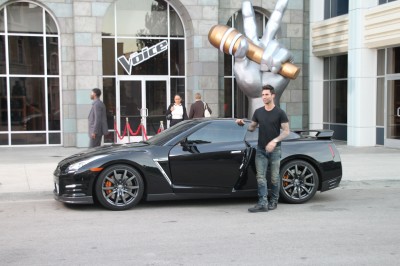 Auto brands are all about attaching a face to their names these days. Nissan, thanks to its ongoing and recently renewed partnership with NBC’s The Voice, already had a recognizable—and devastatingly gorgeous—face at its disposal with Adam Levine. So it’s only natural that the automaker would want to turn around and leverage that chiseled, perfect face for its newest ad campaign.

As part of Nissan’s involvement with The Voice, a vignette will air on next Tuesday’s episode that features Levine singing a live version of the song “SUGAR” from Maroon 5’s album, V. According to Nissan, Levine will perform “while in the middle of a unique driving experience that only Nissan’s 545-horsepower supercar, the GT-R, can deliver.”

So, if we’re gluing this all together the right way, you can watch The Voice on November 18th and let Adam Levine’s sultry voice melt you into a fine butter as he drives around in a GT-R.

That’s pretty good stuff, Nissan. Inquiring minds want to know: will Levine have a monologue where he rolls his thumb over his fingers and muses about the larger implications of an uncaring universe? Also, will he be wearing a shirt?

“We are excited to work closely with Adam and the talented artists on this season of ‘The Voice’ to deliver new experiences for fans and our consumers,” said Fred Diaz, senior vice president, Nissan Sales & Marketing and Operations U.S., Nissan North America, Inc. “Expanding on Nissan’s partnership with NBC’s ‘The Voice’ is yet another way the brand is reaching beyond traditional advertising and marketing programs to connect directly with our consumers.”

Expect to see two more spots thereafter during the November 25th and December 2nd episodes of The Voice, which are scheduled to feature artists showcased in season seven while showing off the best Nissan’s 2015 lineup has to offer.

Bonus points if you live in Nashville or LA: by visiting Nashville’s Ryman Auditorium on November 11th and LA’s Universal CityWalk on November 17th-18th, you’ll have the opportunity to record a video of yourself singing in the backseat of a 2015 Nissan Rogue. Those videos will be submitted to a panel of judges from both Nissan and The Voice, with the winners being posted to Facebook.com/NBCTheVoice from December 1st-5th. The highest vote-getter (and one lucky voter) will win a trip to The Voice finale in Los Angeles and a front-of-the-line auditions pass for a future season of The Voice.

If we were to win, we would probably sing “Payphone” whilst wearing our airbrushed Adam Levine t-shirt we got at the mall. It would be neat-o keen.