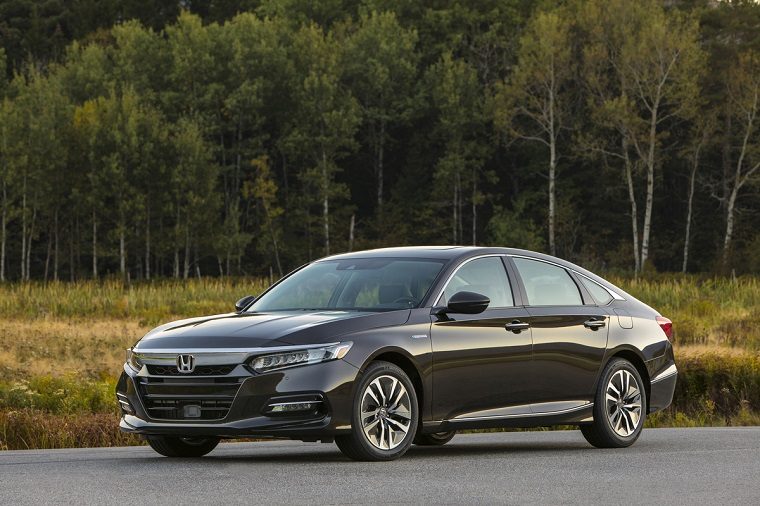 It’s finally here: the hybrid version of possibly the most awarded car of 2018. Arriving at dealerships on March 23, the all-new 2018 Honda Accord Hybrid will deliver all of the things that have earned its ICU-powered counterpart so much recognition in the industry but while achieving an impressive 47/47/47 mpg city/highway/combined, according to the EPA.

Like the regular Accord, the Accord Hybrid is offered at five trim levels: Hybrid, EX, EX-L, EX-L Navi, and Touring. What’s more, the car is actually cheaper than its predecessor, with a starting MSRP of $25,100, down $4,505 from before and excluding an $890 destination and handling charge. The top-of-the-line Touring starts at $34,710.

Despite the price drop, you can still expect a good number of features. LED headlights and taillights, a rearview camera with multiple angles, a 7.0-inch digital gauge cluster, dual-zone climate control, and smart entry with push-button-start technology are standard across the lineup.

More notably, in keeping with the modern Honda tradition, every Accord Hybrid also comes equipped with the automaker’s suite of advanced safety and driver-assistive feature, all wrapped up in a package called “Honda Sensing.” This includes tech previously reserved for high-end luxury cars, such as adaptive cruise control and collision mitigation braking, the latter being able to automatically stop the car in the event of an impending crash and of driver inaction.

The powertrain of the Accord Hybrid consists of a 2.0-liter i-VTEC Atkinson-cycle four-cylinder engine, boasting an impressive 40% thermal efficiency, and an electric propulsion motor, which together make up to 212 horsepower and 232 lb-ft of torque.

Thanks to the two-motor system, the Accord Hybrid makes do without a conventional transmission. Energy management can instead be optimized using what Honda calls “Deceleration Selectors” mounted on the steering wheel, similarly to paddle shifters, that allow the driver to toggle between four levels of regenerative braking performance.

The new car is being assembled at Honda’s plant in Marysville, Ohio, alongside the regular Accord, while the engine comes from a nearby plant in Anna, Ohio.