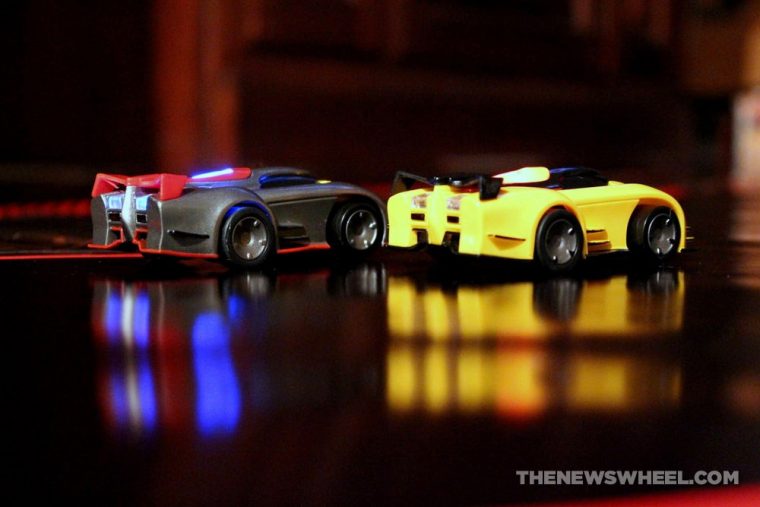 When I was a kid, I used to set up my dad’s old slot car track in the basement and race those delicate plastic cars with him for hours. I loved the thrill of going toe-to-toe on the track and seeing my opponent’s car spin off when a curve was taken too sharply. I still remember having to tweak those metal strips so they made contact with the electric path.

But as time progressed and digital racing replaced dusty old electric toys, I wished that there was some way to make slot car racing appealing again to today’s consumers. Apparently, I wasn’t the only kid who grew up and had that thought.

I recently had the chance to try Anki DRIVE, and despite the set being a few years old, the hi-tech toy didn’t fail to excite my inner child and revive the fun of miniature car racing in me.

Smallest Epic Ever: Check out this awesome video starring remote-control cars and drones

What It Is and How It Works

Anki, a robotics and artificial intelligence company, originated from the work of Carnegie Mellon University alumni. Founded in 2010, the company is headed by graduates who want to bring cutting-edge robotics technology into the average home in entertaining, innovative ways.

Their first product launched, Anki DRIVE, employs artificial intelligence in miniature, motorized cars. The vehicles are controlled via Wi-Fi signals through an interactive app run on smartphones or other devices. Through the app, “drivers” can set up profiles, control the movements of a car on the track, launch digital “weapons” at other cars, earn points for winning matches, and redeem points to customize their car’s performance. 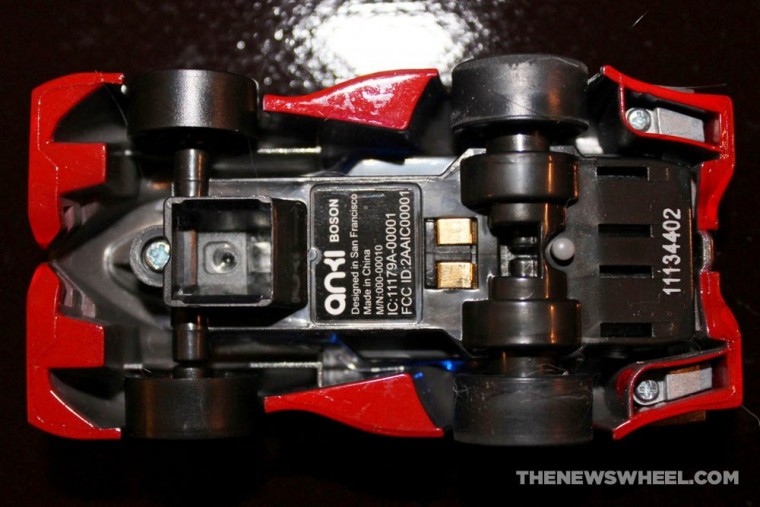 These cars rely on infrared emitters and a lens that functions as an optical sensor, following lines on a large mat that keep them in place. When it leaves the track, the car will move in circles to search for a line to continue on. During play, cars can race around the track in traditional lap racing and/or attack other cars using virtual weapons.

The cars are rechargeable and plug into provided consoles that then plug into the wall. They lose their charge in about 30 minutes (according to our experience) but re-charge in about 10 minutes. While that may sound inconvenient, it is a certainly a quick charge and provides a good opportunity to take a break.

Lean More: Read more about Anki and how its exciting car racing works! 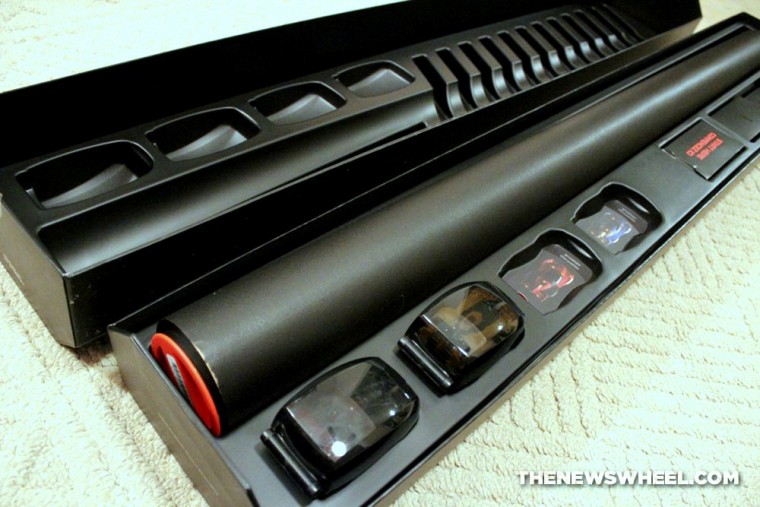 While the box is certainly long due to the dimensions of the track mat it holds, it’s still relatively compact. The heavy-duty cardboard box is durable enough to hold the contents inside, which are organized in sectioned compartments. Having spaces built in for available expansions smartly encourages you to retain the box for storage (while also being a subliminal enticement to buy more). All the glossy, black packaging and sleek artistic flairs on the box make it one attractive package. 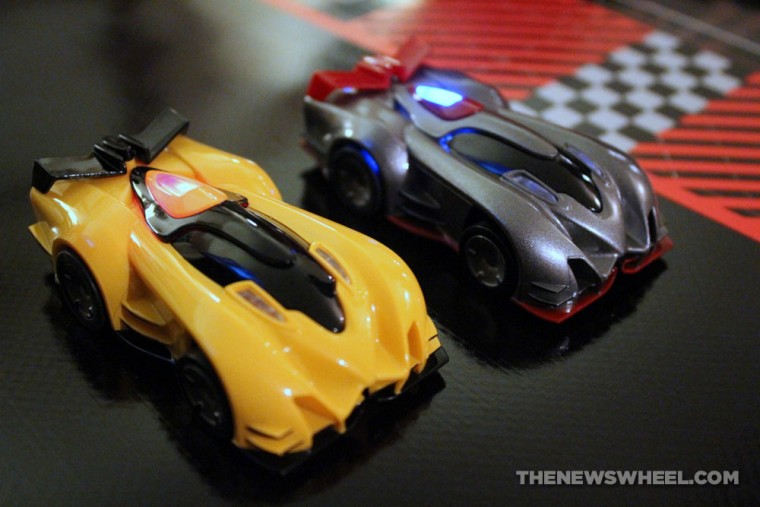 The mat rolls up tightly on its spindle, which is helpful considering how large it is when unrolled, taking up much of an average-sized room. Fortunately, the track–for playing purposes–is an ideal size, not too small but still tight enough for fast races. The corners of the mat do curl up when unwound due to being rolled when stored, so we had to use weights to keep the edges down.

The cars are also the perfect size, near the dimensions of a Hot Wheels model car. Their stylish designs add to the futuristic feel of Anki DRIVE (which is also emulated in the graphics and music in the app). The cars are relatively durable, having crashed and dropped them a few times during play. The indicator lights on them illustrate what’s going on (such as brake lights indicating when they’re damaged). 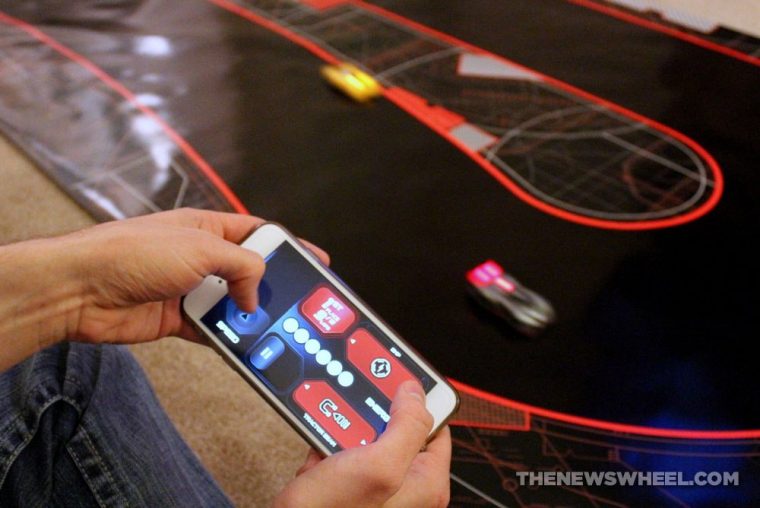 Players will need to supply their own iOS or Android devices to control a car through a free downloadable app. Once you download the app to your phone, you’ll create a custom profile that retains your name, stats, achievements, and points. 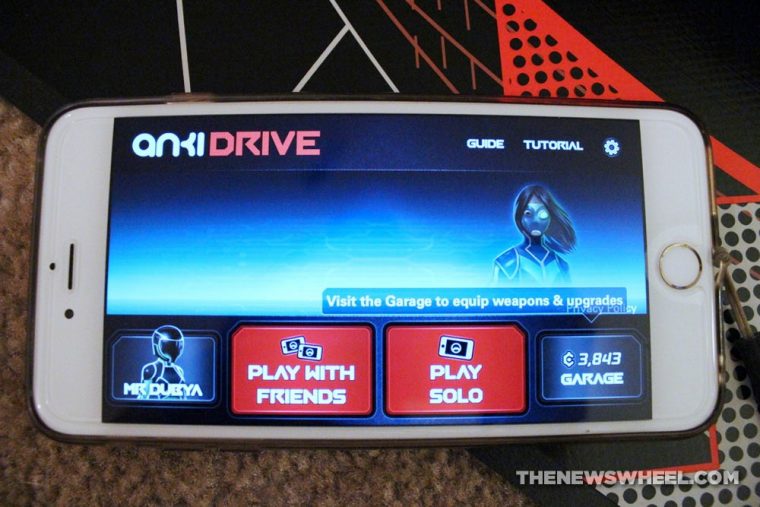 A typical iPhone or Samsung Galaxy is the perfect size to use. Buttons on the app are big and easy to master, cycling through weapon options or adjusting your speed. The cars respond immediately to your movements and commands, and I didn’t notice any lag time, which impressed me. Using the phone as a controller is also an effective gateway to involve people who typically don’t play video games or RC cars. The use of the app is complimentary to the action on the track, keeping the focus on the cars rather than on the screens.

There are three modes in Anki DRIVE: Battle (playing for points), Race (running laps), and Team (pairing up if more than 2 cars are in play). Each mode can be player vs. player or player vs. computer. An intuitive AI can control one of the cars based on a unique, chosen personality and racing style. This allows people to play against the computers when alone rather than relying on people to play against. By defeating computers, players will accumulate points for virtual car upgrades.

Serious Craft Skills: Did you know it’s possible to turn cardboard boxes into a remote-control tank? 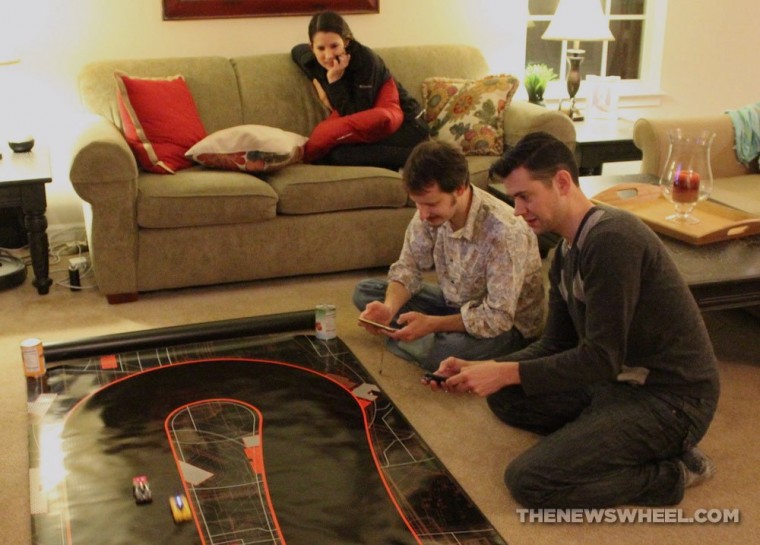 Simply put, playing Anki DRIVE was a lot of fun. The group of us ran the cars for a couple hours straight, racing or battling each other and trying out all the vs. computer modes. While it was only one night of play, we did not get bored of it.

One of the criticisms that Anki DRIVE has received is that its novelty wears off after playing it for a while. First of all, what toy–and even racing video game or app–doesn’t lose its initial luster after a couple hours of play? That’s more of a reflection on society’s short attention spans and stimulus-addicted mentalities. Second, the fun of playing with Anki DRIVE didn’t wear off for me in that manner, so not every person’s reaction will be the same. Still, the people who owned the Anki DRIVE we played said they don’t take it out as much as they used to.

The biggest drawback to Anki DRIVE is the single oval track you’re limited to on the included mat, whereas old slot car tracks could be customized based on modular pieces. Luckily, this is something that Anki has improved with its follow-up to the DRIVE product: Anki OVERDRIVE (something we at The News Wheel would love to try out). 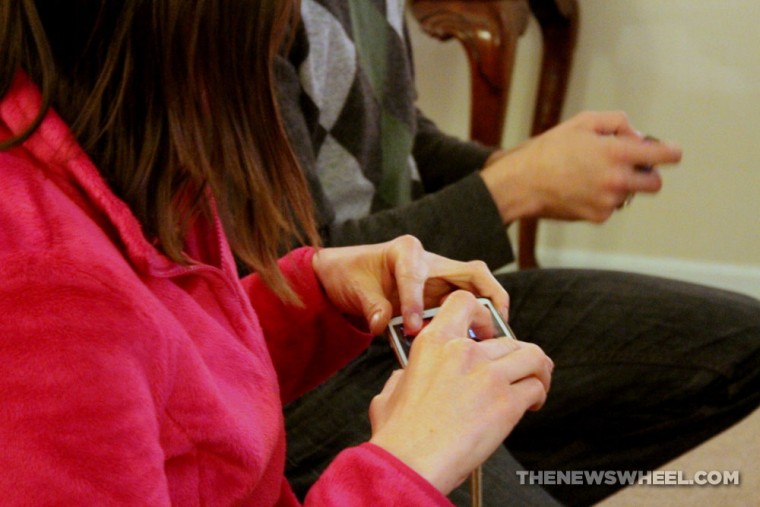 Overall, Anki DRIVE is a blast. Younger children who are used to playing video games will greatly enjoy the integration of app-based controls with the real-world experience. And adults who grew up with RC or slot cars will find the addition of wireless robotics and digital controls to be an improvement on basic toy car racing–without detracting from what made the originals fun.

If you’re expecting something life-changing that will be your new favorite past-time, you’ll probably be disappointed. Clearly, Anki DRIVE is not the final step of this robotics-racing project but merely the first wide-released step, as evidenced by the more advanced, customizable Anki OVERDRIVE which replaced it in 2015. So there are some “rough edges” that need to be smoothed out.

My recommendation is to not invest too much into Anki products if you know you won’t love it or play with it frequently. If you have compatible devices to run the app and people to play with regularly, go for it. Otherwise, it’s going to be in storage most of the time and you won’t have the motivation to unlock everything Anki systems fully offer. And you’ll be spending a lot of money on that.