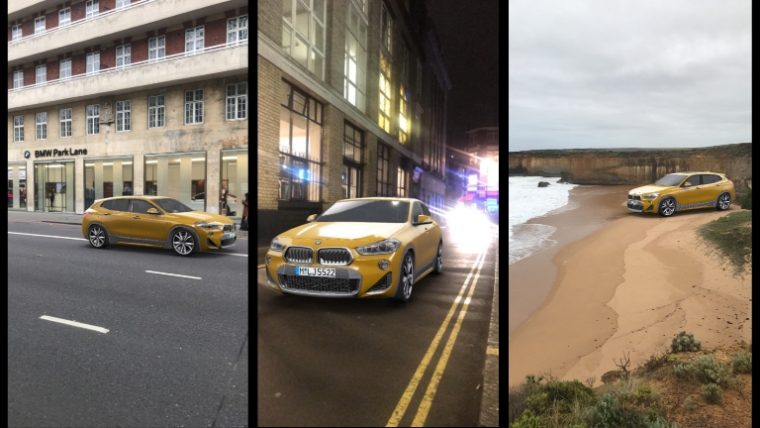 Is BMW trying to create the next Dancing Hot Dog filter?

To see a BMW X2 in the showroom, you’ll have to wait until its market launch in March. In the meantime, BMW has developed a way for many of its users to examine the X2 up close without it ever actually being in front of them.

Prior to the model’s public release, BMW and Snapchat have teamed up to create a BMW X2 Augmented Trial Lens.

First launched across Europe, the BMW X2 Augmented Trial Lens allows Snapchat users to apply a filter that transports a virtual version of the upcoming 2018 BMW X2 right in front of them, at least when they’re using the Snapchat app. The lens even allows users to change the color of the X2 from its signature Galvanic Gold finish.

Speaking of changing colors, BMW and Snapchat also developed a second, far more bizarre lens. The specialized face lens allows users to apply the X2’s Galvanic Gold hue to their own face, transforming them into a gold-clad version of themselves.

You can see the first filter in action by watching the video below:

BMW’s partnership with Snapchat was definitely something of a strategic one. The strategy, of course, is to appeal to a younger demographic to promote the X2.

“Snapchat is young and modern – which suits BMW and the BMW X2 perfectly, explains Jörg Poggenpohl, head of Digital Marketing for BMW. “We wanted to insert ourselves in an organic way into the Snapchat environment and its users’ world. That is the most meaningful way to address our fans in a style that fits the channel and the target group.”

Other hip, young interfaces that BMW has partnered with for the X2’s launch include Shazam and the Microsoft HoloLens. The automaker even alluded to future partnerships leading up to the X2’s release next spring.