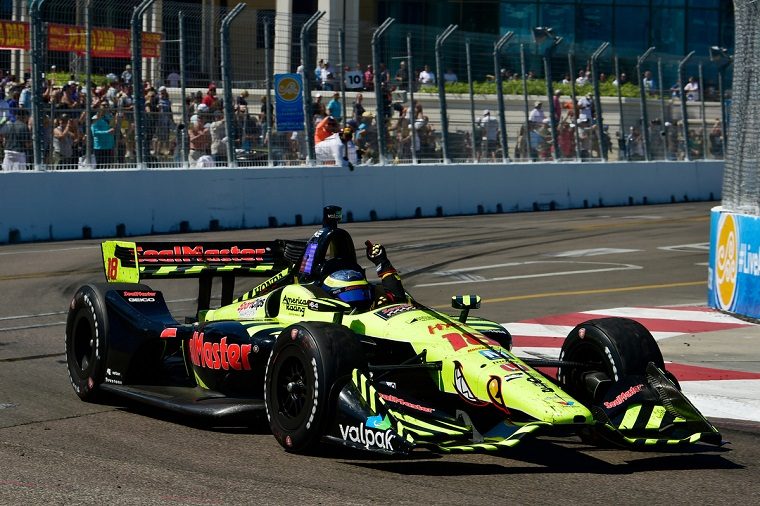 It was speculated that IndyCar’s new 2018 aerokit would benefit Honda, thanks to its superior engine, and so far this is looking to be the case after the opening race of the IndyCar season at St. Petersburg, where four Honda drivers led 105 of the 110 laps, and eight Honda-powered cars finished in the top 10.

A thrilling finish saw Andretti Autosport Honda’s Alexander Rossi all over the gearbox of Schmidt Peterson Motorsports Honda’s Robert Wickens, who had placed on pole and ultimately led 69 laps. But Rossi, who had started 12th, looked faster.

With only a dozen laps to go, however, Rossi locked his brakes on the attack and lost a lot of ground, after which the fight looked to be over. Then, four laps later, Max Chilton spun, stalled, and after officials restarted his car, they decided to do a lap of caution, which brought Rossi right back into contention.

Wickens had a bad launch on the restart, later blaming the pace car for not turning off its lights, and Rossi tried his move on the inside part of the track, only to find the limit of grip on the loose marbles and send the rival Honda driver spinning into the wall.

Though Rossi was better off after the crash, he also lost a lot of time, and it was Sebastien Bourdais, driving for Dayle Coyne Racing with Vasser-Sullivan Honda, who swept in for the win, making it his second consecutive victory at St. Petersburg.

Though Wickens was disappointed not to secure his rookie win, others believe he may have gotten what he deserved. “At the start, Wickens squeezed me really tight,” said Will Power, who was involved in a crash with Wickens at the start of the race before clawing his way back to 10th place. “We hit and spun me out and that put us on the back foot from the beginning. I tried my best not to hit him. Maybe I should have just taken him out.”

“Screw him,” Power added. “I was trying to be nice, but if that’s the way he wants to race. I thought he would have given me a little more room. I would have backed out if I knew he was going to do that. Before, I had not raced him, but I know now.”

Before making his IndyCar debut, Wickens had a highly successful career for Mercedes-Benz in DTM racing. Power was keen on pointing out that the two series are very different. “It’s not DTM; I’ve seen how those guys race over there. This is open-wheel. You can’t race like that.”