NASCAR is an interesting sport that is watched by two main groups of people.  The first are diehards that root for their favorite driver, and the second are the thrill-seekers that like to see a good crash.  Every safety precaution possible has been taken in NASCAR, but explosive, fiery crashes are inherent to the nature of the sport – it’s just normally not the pace car that goes up in flames.

That is exactly what occurred last week at Daytona when the 2014 Chevrolet SS pace car was leading a pack of cars around a turn.  Check out the video below.

Fortunately, the two NASCAR officials inside the car got out unharmed.  A faulty battery in the trunk may have been to blame for the unusual incendiary event.

“The pace car experienced a fire in the trunk area, which contains a purpose-built auxiliary electrical kit to operate the numerous caution lights during the race,” Chevrolet said in a statement. “The pace car driver and passenger safely exited the vehicle. An assessment is underway.”

Was the Chevy SS pace car catching fire the highlight of this year’s Daytona 500? Share your favorite moment in the comments below! 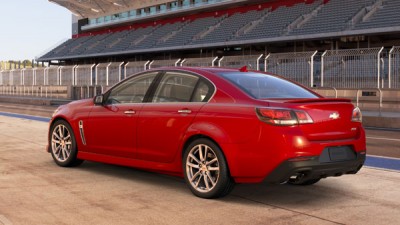