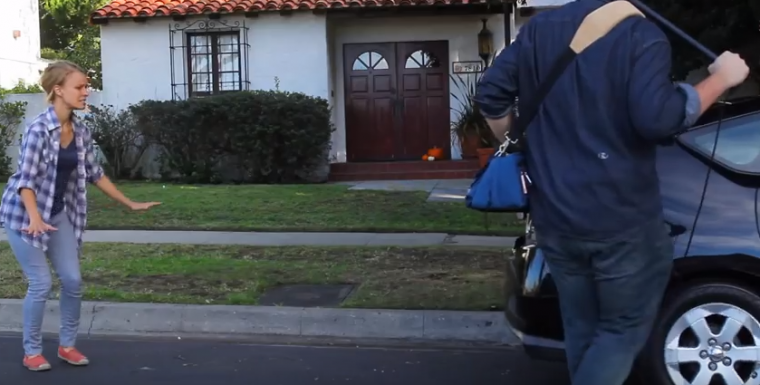 Behind the scenes of Check Your Surroundings for Safety

Cameras are becoming more and more embedded into our daily lives. With much of the population having access to cameras via their smartphones, as well as adventurers filming their hijinks using GoPro cameras, it’s difficult to get away from the technology. And many drivers these days even have access to cameras positioned on their cars with the intent of helping them back up safely.

It’s the latter type of camera that is the star of a new spoof “behind-the-scenes” video produced by comedians Andrew Heder and Ryan Kelly—known to their fans on YouTube as Mommy Comedy. Heder and Kelly created a six-and-a-half-minute video purporting to be a behind-the-scenes glimpse of a new feature film that has been shot entirely using the backup camera of a Toyota Prius. The video features footage from the “film,” as well as interviews with director Mateo St. Portugal, producer P. Brooks (whose name later changes to P.B. Brooks, and P.B. & J. Brooks), actor Rose Pilates, and more. Check it out:

Speaking about the unusual choice of a car’s backup camera rather than an actual video camera, Rose Pilates explains, “Usually when you’re that close to a lens, you’re worried about ‘How does my face look?’ I was more worried about, ‘Am I going to be hit?’”

Director St. Portugal is a stereotypical filmmaker along the same lines as Quentin Tarantino. When asked about his use of the camera to film his new movie, he explains, “The Prius backup camera is the only camera that is able to run a person over. Other cameras do not run them over, because they are not cars.”

The fake movie is called Check Your Surroundings for Safety, which seems fitting given that the actor is constantly having to do just that to make sure she doesn’t get hit.

This movie might be a fake, but perhaps someday, an experimental indie filmmaker will use his car’s backup camera to do something similar to this. But probably not.