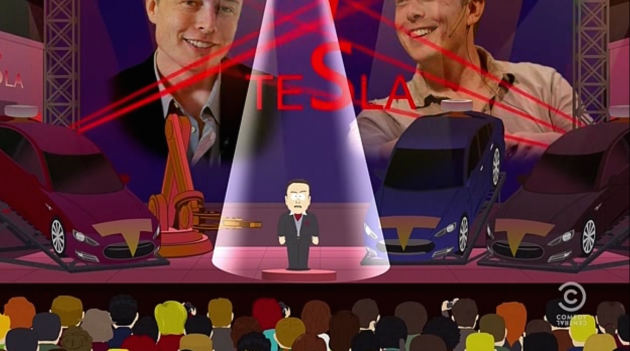 With appearances on both The Price is Right and South Park, this week Tesla is really cornering the stoner television market. We are guessing Elon Musk won’t be too thrilled about the latter “endorsement,” though.

Like most current South Park episodes, “Handicar” features an incredibly topical and convoluted plot, so get ready for a fairly lengthy recap (SPOILER ALERT): South Park Elementary’s favorite handicapable student, Timmy, decides to raise money for summer camp by creating his own rideshare program called “Handicar.” It basically involves him pulling people along in a rickshaw that is powered by his own electric wheelchair, which customers can order to come pick them up with the Handicar app. 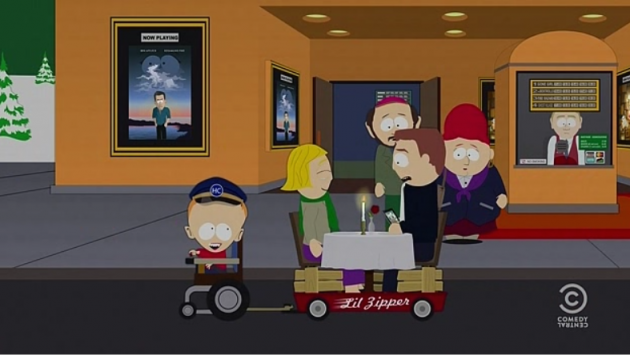 Timmy and his wheelchair-drawn carriage, the “Handicar,” which parodies rideshare programs like Lyft and Zipcar

Timmy’s fundraising efforts upset his arch nemesis, Nathan (head of “the handicap mafia”), who despises summer camp and doesn’t want to go this year. So Nathan and his bumbling assistant Mimsy join forces with cab drivers and Hummer dealers who are being put out of business by the convenient Handicar, and the group attempts to get rid of Timmy’s rideshare program. But soon everybody is operating their own Handicar, including Mathew McConaughey, who – in a parody of the actor’s new ads for the Lincoln MKC – claims he’s been driving a Handicar long before anyone paid him to drive one. 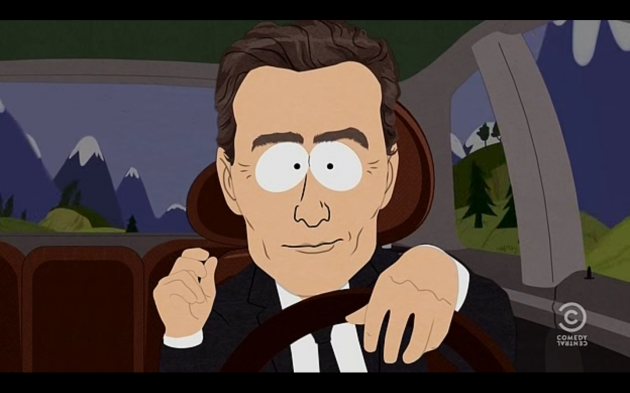 Matthew McConaughey: “Sometimes you gotta go forward by going backward… are we driving cars or are cars driving us?”

At this point, Elon Musk and Tesla Motors decide that they too feel threatened by the new zero-emission Handicar, so Musk challenges both the mainstream auto industry and rideshare programs to a contest that will decide the future of automotive transportation once and for all. More specifically, Musk challenges them all to some Wacky Races.

The Hanna-Barbera-inspired event is televised on CNN on Saturday morning, in reference to the fact that last Saturday marked the first time in years that there have been no Saturday morning cartoons aired on television. 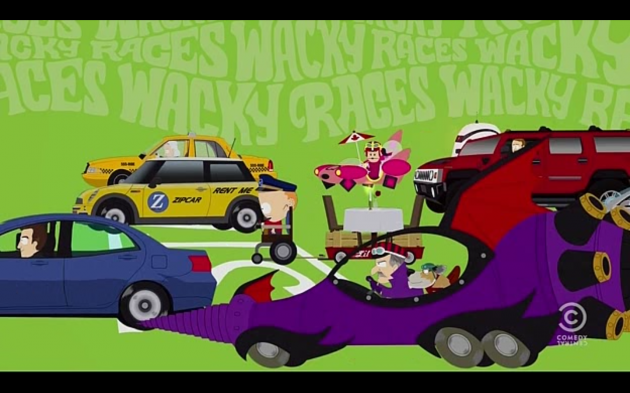 In addition to Timmy’s Handicar and Elon Musk’s Tesla Model D, participating in the Wacky Races are the Lyft car; the Zipcar, driven by McConaughey; a standard taxi cab, driven by an angry Russian; a 2014 Hummer No-Class, driven by a Hummer dealer; a completely automated self-driving car from Japan; a Canadian concept vehicle called the Queef, which is driven by Canadian actress Neve Campbell and powered by “natural gas” (har-har); and of course, Dick Dastardly and his snickering sidekick Muttley in their infernal contraption. 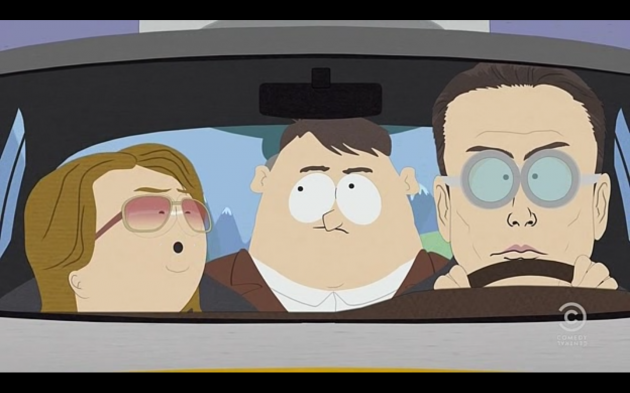 Nathan, Mimsy, and a goggles-wearing Elon Musk compete in the Wacky Races in a Tesla Model D

Naturally, during the Wacky Races, some hilarity (and a fair amount of wackiness) ensues. Nathan plots to blow up Timmy’s Handicar, but instead accidentally destroys McConaughey’s Zipcar, because Mimsy thought McConaughey was the “fake, soft-spoken douchebag that everyone loves” who he was supposed to plant the dynamite on. Along with the other wacky hijinks, including the damage done by Musk’s rocket-equipped Model D, this clears the way for Timmy to win the race in his Handicar. 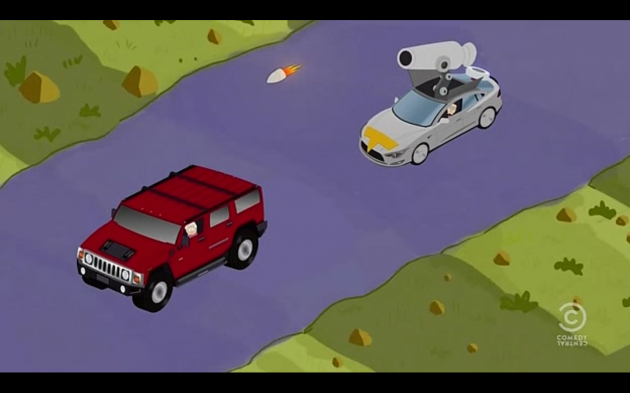 Musk’s Tesla D is equipped with its own rocket-firing capabilities, which he uses to take out the 2014 Hummer No-Class

It all ends happily, because Timmy raises $2.3 billion dollars for summer camp by selling the rights to Handicars to Elon Musk. Then there is a particularly dark scene at the very end in which Nathan begs his uncaring parents not to send him to summer camp, which ends the episode on a pretty dark note.

Like most latter-day South Park episodes, “Handicar” is so aggressively topical that you have to wonder if people who watch the rerun a few years from now will have any idea what relatively minor news stories are being alluded to on the show. But while it’s no modern classic, the episode is a lot of fun for automotive enthusiasts, and/or people who like to make fun of Elon Musk. 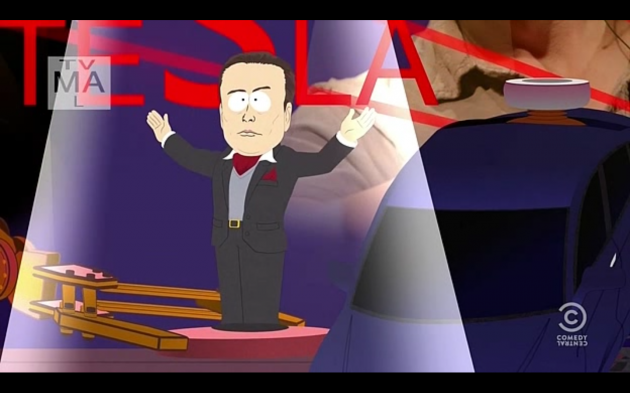 Elon Musk and Tesla Get South Park Treatment: In all honesty, we think the ascot is a good look for Elon

Apparently Musk himself is among that group, because he took to Twitter shortly after the episode aired to offer his thoughts on the parody. 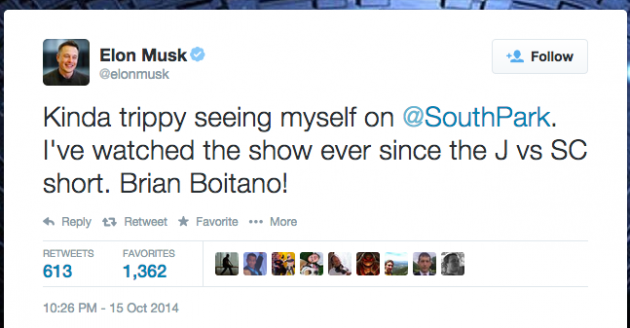 And hey, it’s always nice to watch some Wacky Races. In fact, let’s watch some now: