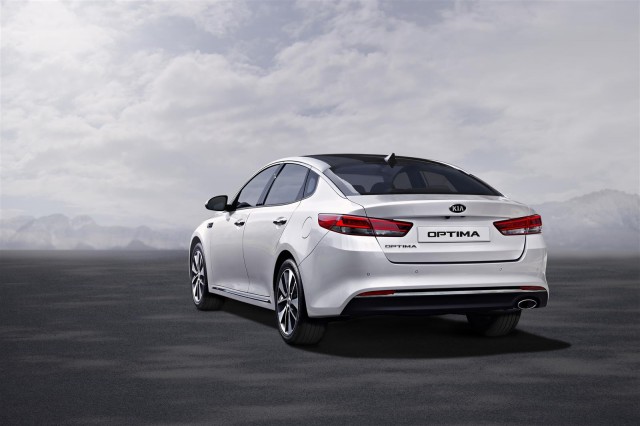 Pictures of the European 2016 Kia Optima were leaked before the sedan’s debut
Photo: AutoBlog.nl

Earlier this week, we got a sneak peek at the all-new European Kia Sportage model. Now, Kia has let yet another sneak peek slip through the cracks. The first official units of the European market 2016 Kia Optima have leaked out onto the internet, showcasing a different styling than the new US model, which is currently on sale.

Want to Compare the 2016 U.S. Optima?: Dare to compare it here with the Accord and Camry

The European Optima model features a different front and rear end with a much more European flair than the US model. It has slight different taillights, with a new inner LED design that should be more appealing to our friends across the pond. Compared to the previous European Kia Optima, the 2016 model offers 10 mm more in length, 22 mm more in width, and has grown 10 mm in the height department. It even offers a nice 18 cubic feet for luggage.

Along with more space, the European Optima model will use a 1.6-liter CRDi diesel engine for power. This powertrain is rated at 141 horsepower and 251 lb-ft of torque, and will come with either a six-speed manual or a seven-speed DCT transmission.

When the Optima model first arrives in Europe in the fourth quarter of the year, it will be offered only as a sedan. An estate version will follow later, along with a hybrid powertrain option.