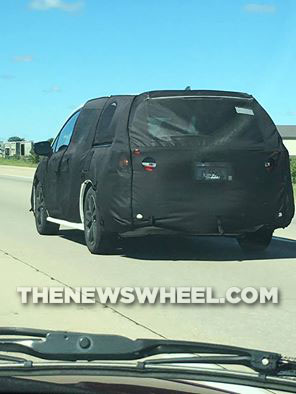 Here at The News Wheel, we’re proud to be able to bring you this EXCLUSIVE (!!!) spy shot of the 2018 Honda Odyssey, which was recently seen testing near Honda’s headquarters in Marysville, Ohio.

Sure, it’s just a minivan prototype in Ohio, not a supercar spotted in Spain—but still, it’s a spy shot! Exciting stuff!

Of course, the “spy” responsible for this shot is less like James Bond and more like Bill Murray’s character from The Man Who Knew Too Little. Which is to say, our intrepid photographer came across this undercover minivan completely by accident—he was driving just south of Columbus, thought it was strange that the vehicle in front of him was covered in a black tarp, and snapped a picture with his phone.

After he posted it to Facebook, one of our writers recognized the vehicle and procured the image for our site, making sure that the photographer was properly compensated for his work (he bought the dude a beer).

There’s not too much to see here, though you can make out the new, Accord-like taillights. Spy shots taken back in April appear to show a lower grille, as well.

Some of the biggest changes coming to the 2018 model year wouldn’t be visible to the naked eye (even if the vehicle wasn’t dressed so conservatively). Earlier this year in Japan, Honda released a hybrid version of the minivan, capable of achieving 54 mpg.

It wouldn’t be too shocking if Honda chose to bring that hybrid technology to the next American Odyssey model, especially since Chrysler is going to be selling a plug-in hybrid version of the Pacifica.

If we luck into any more spy shots of the 2018 Honda Odyssey (or any other model), we’ll be sure to share them here.