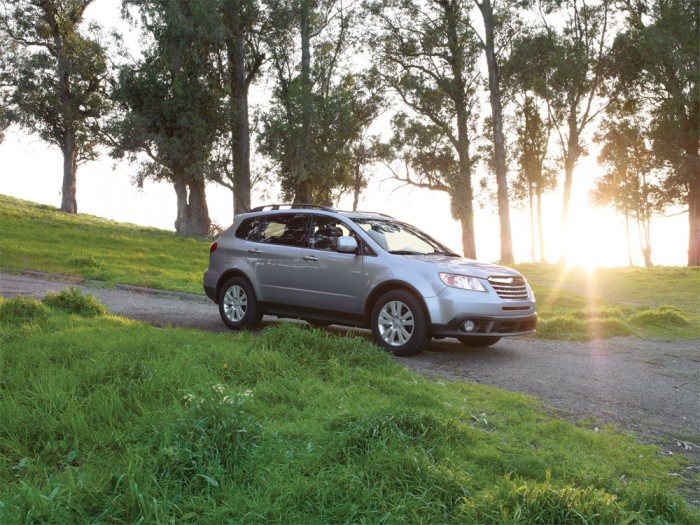 The Subaru Tribeca (pictured) was recently taken from Subaru’s lineup, but rumor has it a flagship Subaru seven-seater SUV is on its way, likely debuting for the 2017 model year

At the end of last year, the rumor mill started churning out some gossip about a potential flagship SUV from Subaru, a seven-seater meant to replace the outgoing Tribeca model. This seven-seater SUV could potentially bow at the 2015 Tokyo Motor Show in late October and early November, but Subaru has yet to confirm this. The range-topping SUV, which would be built at Subaru’s Indiana facility, would then go on sale late next year or in early 2017, as a 2017 model year.

The Best in Its Segment: See why the Subaru XV Crosstrek is the Best Subcompact SUV

According to Digital Trends, however, Subaru has yet to settle on an exact design plan for the upcoming flagship SUV. The Tribeca hardly impressed potential buyers, so Subaru is considering something closer to the rough looks of the off-road-ready Outback, which has captured a devout following among drivers in that segment. Subaru is also considering taking cues from the Forester, which is smaller and more conventional in terms of design.

This flagship Subaru seven-seater SUV will be entering an arena of stiff competition. The Toyota Highlander owns the segment, but the 2016 Honda Pilot just debuted in Chicago and is looking to claim some more territory, and Volkswagen has promised a seven-seater ready for launch in 2016. Subaru’s Symmetrical All-Wheel Drive will obviously be a key selling point to set the SUV apart from these contenders, though the engine options (gas-powered flat-fours and six-cylinders) are likely to be recycled from other models. However, Motor Trend has indicated that Subaru eventually might bust out a plug-in diesel variant for the upcoming model, which is something we haven’t yet seen here in our market and could make Subaru’s offering a standout in its class.

Look here for more information this fall, when the model potential prepares for a debut in Tokyo.