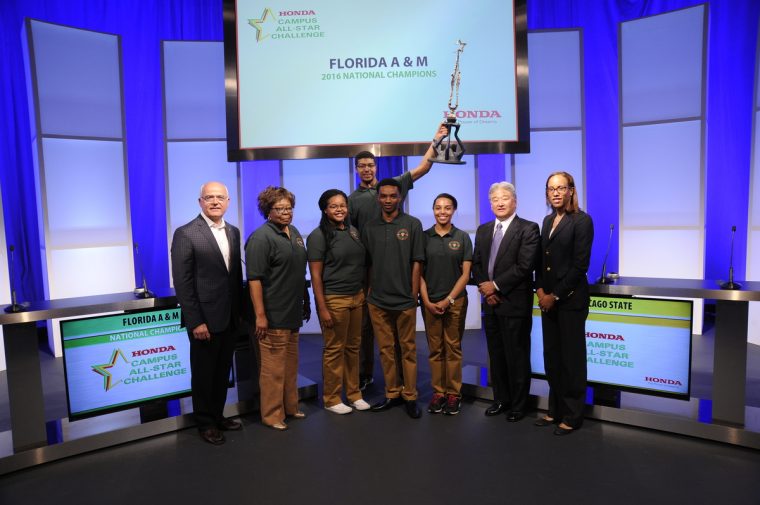 Another crazy March of competition has finally come to an end, with a large pack of colleges and universities whittled down to just one remaining school that can claim the title of national champion—Florida A&M University.

I am, of course, talking about the 27th Honda Campus All-Star Challenge (HCASC) National Championship Tournament. The team of Florida A&M University students earned a thrilling victory over first runner-up Chicago State University by correctly answering questions about the country of origin for a variety of notable Americans, winning the school its eighth HCASC National Championship title.

Honda is the founding sponsor of this academic competition for America’s Historically Black Colleges and Universities (HBCUs), and the automaker contributed more than $300,000 in institutional grants to schools that participated in the contest.

“I’m overwhelmed and just so proud of these students who have worked very hard over the past nine months and have come together to form such a strong team,” said Dr. Vivian Hobbs, who coached the Florida A&M University team.  “The commitment, discipline, knowledge and collegial spirit they displayed helped them win this national championship title.”

“Honda is pleased to congratulate Florida A&M University on its eighth championship title, and we applaud each of the nearly 200 extraordinary students who participated in this year’s Honda Campus All-Star Challenge National Championship Tournament,” said Steve Morikawa, Honda’s Vice President of Corporate Relations and Social Responsibility. “We also thank the volunteers and alumni who helped make this year’s tournament a success and who support our mission to celebrate and promote student achievement.”

Florida A&M University not only took home the trophy this year, but also earned the top prize of $75,000 in university grants. Second-place Chicago State University won $30,000 in grants, while the third and fourth place finishers—Morehouse College and North Carolina Central University, respectively—earned $20,000 each.

“This has been a lot of fun and I’ve loved playing with this team,” said Florida A&M’s team captain, Kimberlyn Elliott. “This competition is full of incredibly talented people and I’m proud of my team and our coach for earning this eighth win for Florida A&M!”

The National Championship Tournament was made possible by the work of over 100 volunteers, which included nearly 40 Honda associates.