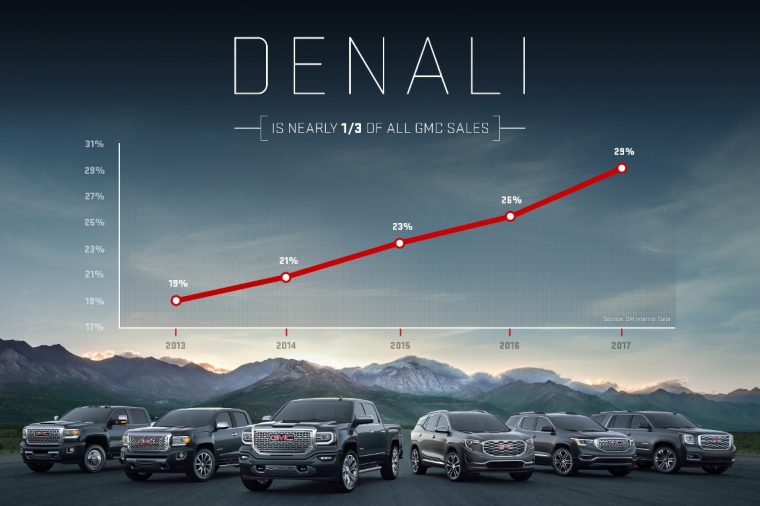 GMC shed a bit more light this week on what was a record year for average transaction prices (ATPs) and Denali brand sales in the United States, as well as on how it performed in some of its other key markets.

“GMC had an outstanding year and continued to demonstrate its strong position in the broader GM portfolio,” said Duncan Aldred, vice president, Global Buick and GMC. “We introduced an all-new Terrain in a competitive and quickly growing segment, increased demand for the Denali sub-brand, and consistently delivered premium trucks and SUVs to our loyal and new customers whom we know seek top quality and excellent value for their money.”

With total sales of 560,687 vehicles and retail sales of 477,980 vehicles, GMC was the sole GM brand to deliver year-over-year gains for both in 2017. More impressive than volume increases, arguably, was the amount paid per vehicle on average and the number of those vehicles that were of the Denali subline. GMC noted that its full-year ATP of $43,800 was up 35% from 2007’s ATPs of $32,600, with the continual increase in ATPs likely indicating bright things for 2018.

The reason for this increase is the continued success of GMC’s Denali vehicles. According to GMC, 29% of all vehicles sold in 2017 were Denali trims, and four models in its lineup saw Denali penetration of 30% or greater—Acadia at 30%, Sierra HD at 50%, Yukon at 54%, and Yukon XL at 63%.

2017 was also a big year for GMC in Canada and Mexico—in the former, the brand saw its best retail and total sales in history; in the latter, it saw its second-best year for total sales since its arrival in 2006. GMC also noted a 26% year-over-year sales increase in the Middle East in December, driven by gains from Terrain, Sierra, Yukon, and Yukon XL.