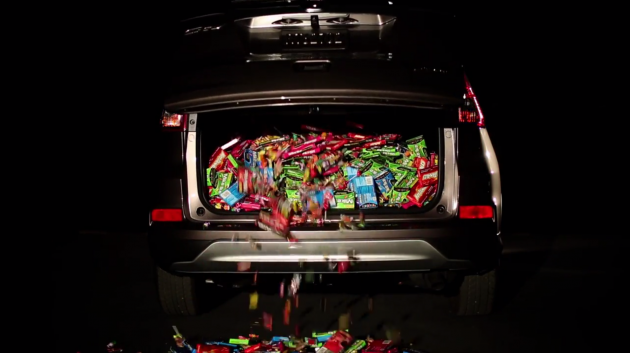 A CR-V full of Mike and Ike candy, part of the Honda trick-or-treating on Twitter

Even if you’re too old to go door-to-door this evening, you can still score some free Mike and Ike’s today by taking part in the Honda trick-or-treating event on Twitter. Just take a picture of yourself in your costume and tweet it @Honda with the hashtag #TreatPromo. In response, the Japanese automaker will send you a coupon for free Mike and Ike candy, while supplies last.

More from Honda: Honda Accord Reviews

In addition to the coupon, Honda will also tweet participants a “spooky Vine video,” which shows a Honda CR-V opening from the rear and unleashing a whole mess of Mike and Ike candies, allowing the brand to subtly tout the CR-V’s class-leading candy storage capabilities.

“In the spirit of Halloween, we wanted a simple and unique way to show some appreciation to our fans,” said Tom Peyton, AVP, Advertising and Marketing at Honda. “Innovation is at the heart of our brand. Why not look at innovating something as fun as trick or treating?”

So far, several good costumes have taken part in the “trick-or-tweeting” festivities. Our favorite so far is this little guy’s Viking get-up: