Have You Watched ‘Logan’ Yet? Then You’ve Seen Wolverine Drive a 2024 Chrysler E8

In the midst of over-hyped, big-budget superhero flicks releasing this year, James Mangold’s Logan is a breath of fresh air. Brutal, dramatic, and surprisingly realistic, it took an alternative approach to portraying the existence of mutants, from the cinematography and aesthetic to the set pieces and the props.

If you’ve seen Logan, you probably noticed how realistic–yet marginally futuristic–the vehicles are, including James “Logan” Howlett’s Chrysler limousine. It’s a great example of how essential a role cars can play in storytelling.

How X-Men’s Logan Movie Made Futuristic Cars a Reality 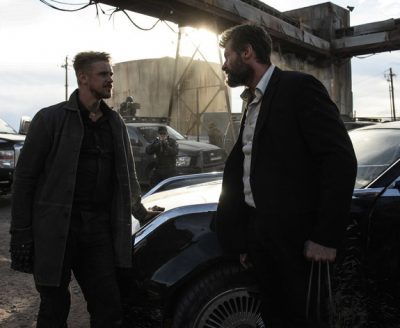 When we’re first introduced to Logan (Hugh Jackman in his final portrayal of the character) in this month’s film, he’s a limousine driver who’s making ends meet by taking jobs for a variety of clientele. With as much screen time is spent inside the vehicle–both in conversation and evading pursuers–it’s no surprise that a lot of effort went into making it a real-life, drivable vehicle.

The car, as specified in the movie by the characters, is a black 2024 Chrysler E8. The brand does not currently produce a limo with that badge, but the custom-modified vehicle used on set is an elongated version of a Chrysler 300 with altered fascia and taillights. Using a skin that wrapped over the actual body, the futuristic Chrysler E8 was bulkier and rounder. It maintained Chrysler‘s signature style while allowing the crew to depict damage on it with bullet-ridden panels.

In many ways, Wolverine reflects the car he drives–outdated, worn-out, enduring heavy damage, and sticking out in a crowd like a sore thumb. Yet when push comes to shove, they both are capable of a lot more than they appear.