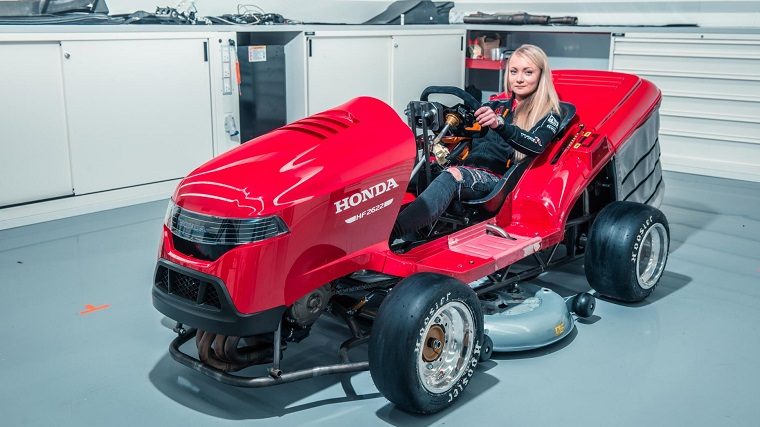 While Bugatti and Koenigsegg battle over making their production cars get closer and closer to the 300 mph barrier, Honda is busy laying claim to another record: that of the fastest lawn mower.

It’s a record that Honda held for only a year. In 2014, the automaker built the hilariously-named “Mean Mower,” a lawn mower powered by a 1,000-cc Honda VTR motorcycle engine making 109 horsepower. With Top Gear Magazine writer Piers Ward at the wheel, it shred the previous record by a hefty margin, achieving an average speed of 116.57 mph at the IDIADA Proving Ground in Tarragona, Spain, as verified by Guinness World Records.

Just a year later, however, it was dethroned by a Norwegian man who, in a fit of madness, had the wild idea of stuffing the small-block V8 engine from a 1969 Chevy Corvette into his Viking T5 mower, which was then able to hit 133.57 mph. The ball was back in Honda’s court, and like Roger Federer, Honda is keen on slamming it back the other way and reclaiming the No. 1 spot.

Honda Awards: 2018 Honda Accord named ‘Car of the Year’

The new version of the Mean Mower, developed by UK’s touring car racing team Team Dynamics, will boast the 999-cc engine from the brand’s SP1 Fireblade sports bike, which makes a whopping 190 horsepower. That’s right—this will be a lawn mower with more power than your average compact sedan.

This time, though, the Mean Mower will be piloted by an actual racing driver. “Jess Hawkins has the unenviable task of taming this beast, and with her background as a stunt driver in Fast and the Furious Live as well as numerous karting and car racing successes, she’s far better qualified than me,” Ward says.

Team Dynamics is aiming for a dry weight of only 200 kg (440 lb) and wants to equip the mower with traction control, ABS, and an anti-lift system to prevent it from popping a wheelie—because let’s face it, while a wheelie on a mower would look awesome, it would also end the record attempt and the mower itself right then and there.

More importantly, while just about every part on the Mean Mower will be bespoke, it will still be able to trim your lawn. “Last time around, the mower aspect worked, but you couldn’t cut grass at silly speeds,” Ward says. “This time, there’s no reason why you shouldn’t be able to mow the lawn at 100mph.”

Quick Tip: What kind of tires do you need?