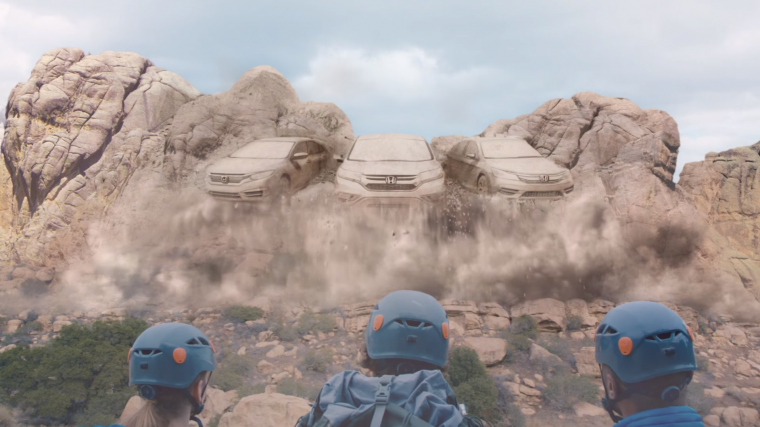 Memorial Day is a federally-recognized holiday observed each year on the last Monday in May. Created in 1868 to honor those who were killed fighting in the American Civil War, today it is a solemn time for remembering those who died while serving in our country’s armed forces, and also a time for getting great deals on new cars and mattresses.

For their part, Honda is celebrating this year with its big 2016 Honda Memorial Day Sales Event, offering holiday discounts on popular models including the 2016 Honda Accord, Civic, CR-V, Fit, and Odyssey, all of which are eligible for zero-due-at-signing lease offers. To promote the big event, the automaker just released an explosive new commercial titled “Mt. Savemore.”

In the ad, a couple of mountain climbers use C-4 plastic explosives to carve the images a 2016 Honda Civic LX sedan, CR-V LX, and Accord LX sedan into the face of a granite mountain. The computer-animated sculpture, dubbed “Mt. Savemore,” is the fakest looking mountain carving this side of North by Northwest.

Of course, the real Mount Rushmore is not a memorial to fallen soldiers, but rather to former presidents (only two of whom—George Washington and Teddy Roosevelt—had any actual military experience beyond serving as Commander in Chief). But while the homage may not hold up under close scrutiny, the ad is correct in its assessment of Americans as a citizenry in love with pyrotechnics and bargains.

During May, 0.9% financing is available for at least three years on the Accord, Civic, CR-V, and Odyssey, while three-year Honda lease deals range from $259 per month for the Odyssey to $159 for the Fit.