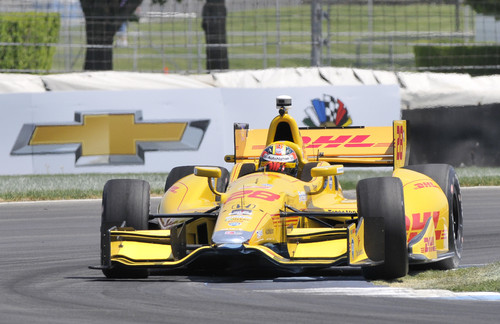 Honda-powered Simon Pagenaud and Ryan Hunter-Reay sped to a 1-2 finish at the Grand Prix of Indianapolis two weekends ago thanks to their superior race pace and fuel strategy.

The start was hectic. Sebastian Saavedra, on pole and backed by a Chevy engine, stalled on the starting grid, causing a multi-car crash that resulted in an eight-lap caution period to restart the race.

Pagenaud, who had been fourth on the starting grid and successfully avoided the crash, zoomed ahead to second place behind fellow Honda-powered driver Jack Hawksworth and ahead of Hunter-Reay.

Unfortunately, a suboptimal pit strategy call saw Hawksworth fall back to seventh place, but Pagenaud and Hunter-Reay managed to stay ahead and hold on to their lead for the rest of the 82 laps, arriving at the checkered flag first for their first 1-2 finish at the Grand Prix of Indianapolis.

“I don’t like having to save fuel, but I did exactly as my team told me to do,” said Simon Pagenaud, race winner. “I just kept working my [fuel] mileage and working my lap times and, thanks to Honda, I think we may have been ‘making’ fuel at the end! Definitely, I think we are now in the hunt for the championship.”