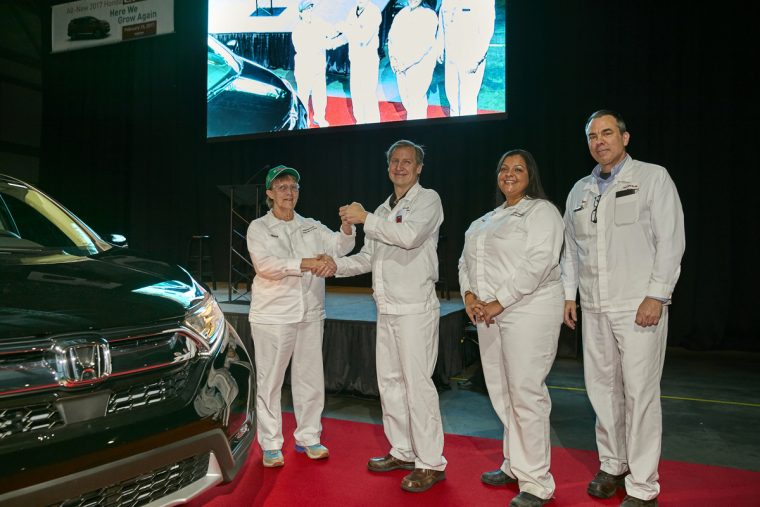 Today at Honda Manufacturing of Indiana (HMIN) in Greensburg, Indiana, employees celebrated the beginning of production of the all-new 2017 Honda CR-V.

America’s bestselling SUV, the CR-V is also the first SUV built at the plant since it began production in 2008.  Now, HMIN will be manufacturing both of Honda’s two best-selling vehicles—the CR-V and the Civic.

In March of 2016, HMIN announced a $52 million investment that led to the creation of 100 new jobs, needed to support the production startup of the Honda CR-V. The SUV’s production was transferred from the Honda de Mexico (HDM) plant in Guadalajara to HMIN. Honda also manufactures the CR-V at auto plants in East Liberty, Ohio, and in Alliston, Ontario, Canada.

Related: Five remote places in Indiana that are worth visiting

“We are leveraging the manufacturing flexibility of our experienced Indiana associates to meet the needs of our customers,” said HMIN President Bob Nelson. “With the CR-V and Civic, we are really proud to build two of America’s best-selling vehicles in Indiana.”

The redesigned and reengineered 2017 Honda CR-V is currently on sale now at dealerships across North America. The fifth generation continues the compact SUV’s tradition as the best-selling SUV in America over the past 20 years, having racked up four million total sales since 1997.

HMIN will continue to produce both the top retail-selling compact car, the Honda Civic Sedan, alongside the best-selling SUV. This is in keeping with the history of the plant, which was the exclusive home of the Acura ILX from April 2012 to November 2014, before the luxury sedan was transferred to Honda of America Mfg. in Marysville, Ohio, in 2015. HMIN also once produced the Civic Natural Gas, which was then the only mass-produced natural gas passenger car in America.