Honda Uses Augmented Reality to Show You Around the New Accord 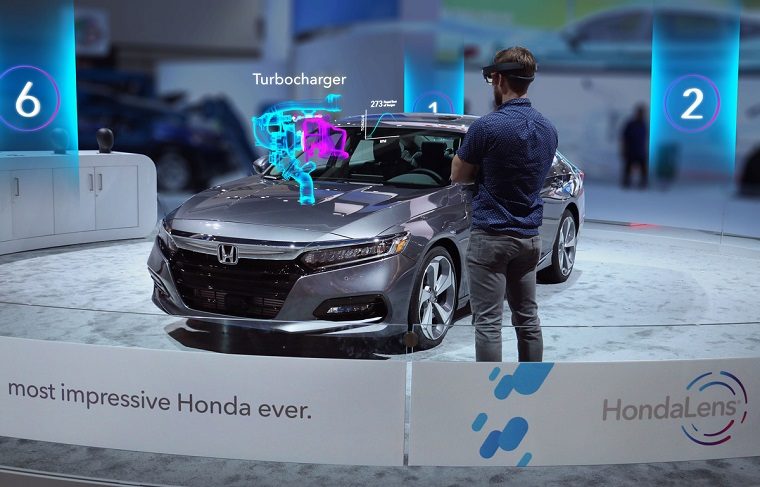 Honda really wants you to know that the all-new 2018 Accord is a next-generation vehicle, so to properly show it off at the 2017 Los Angeles Auto Show, it also debuted a new augmented reality (AR) feature called HondaLens that it used to highlight the car’s best features.

The AR experience requires users to wear Microsoft HoloLens mixed reality smartglasses, which allows them to view six hidden stories they can discover by walking around the vehicle. The digital world was created for Honda by Spinifex Group and George P. Johnson and guides users on where to walk and how to interact via wayfinding arrows and voiceover instructions.

“Using AR in this way allows the user to experience the actual vehicle in the storytelling process. In one example, when users are sitting in the driver’s seat they experience different traffic scenarios that are simulated through the windshield in front of them,” Honda said in a press release.

Related: 2018 Honda Accord in the spotlight

Viewing the car’s features via AR brings users closer than ever to the car. For instance, the experience features a hologram version of the new turbocharged engine that floats out of the hood and shows the user how the turbocharger works. Later, the experience guides the user to sit in the passenger seat, at which point their attention is directed to various new tech features by “beautiful swirling shapes.”

With the all-new 2018 model, the Honda Accord entered its tenth generation and has already earned several industry accolades. Just this month, both The Car Connection and Kelley Blue Book named it the best overall car to buy of 2018.