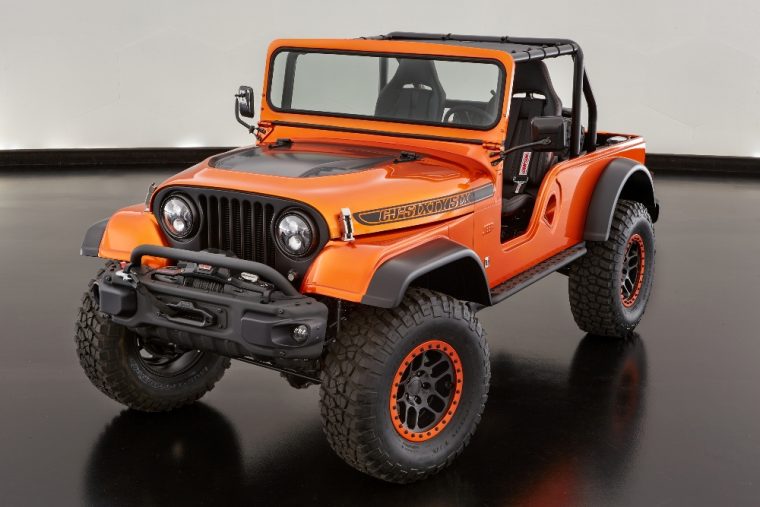 Thanks to the Jeep CJ66, FCA won the SEMA Award for Hottest 4×4 SUV for a seventh straight year

If you attended the 2016 SEMA Show, then you probably couldn’t help but notice the Jeep CJ66.

The Jeep CJ66 made its debut in Las Vegas and it’s a one-of-a-kind 4×4 vehicle that utilizes seats from the Dodge Viper, a Mopar Warn winch, and Jeep Performance Parts (JPP) 17-inch beadlock wheels, just to name of few of its custom features. With all of these eye-catching exterior highlights, it should come as little surprise the Jeep Wrangler earned the SEMA Award for Hottest 4×4 SUV for the seventh year in a row.

Thinking About A New Truck? Learn more about the RAM 1500’s versatility and strong performance

“Jeep is one of the most accessory-friendly vehicles available, having won the SEMA Award as the ‘Hottest 4×4-SUV’ repeatedly,” said Chris Kersting, SEMA President and CEO. “Given the vehicle’s versatility as a daily driver and for off-road use, it comes as no surprise that the Jeep remains so popular among the automotive community.”

Other specialized Mopar equipment used to create the Jeep CJ66 included front and rear Mopar Dana 44 Crate axles, a Mopar cold-air intake, and a Mopar cat-back exhaust pump. All of these features were equipped on a Jeep Wrangler TJ frame, which was covered by a 1966 Jeep Wrangler CJ universal Tuxedo Park body painted in the Copper Canyon hue.

“The SEMA Show and SEMA members play a critical role in identifying the hottest trends and rides in the vehicle customization industry, which is why winning a SEMA Award represents an important recognition for our company,” said Gorlier. “Enthusiasts customize vehicles they love and feel passionate about, and we at Mopar are lucky to have such a great portfolio of vehicles within the FCA umbrella. FCA vehicles are the perfect canvas for our accessories and performance parts.”

New vs Used: Did you know each Certified Pre-Owned CDJR must complete a 125-point Inspection?