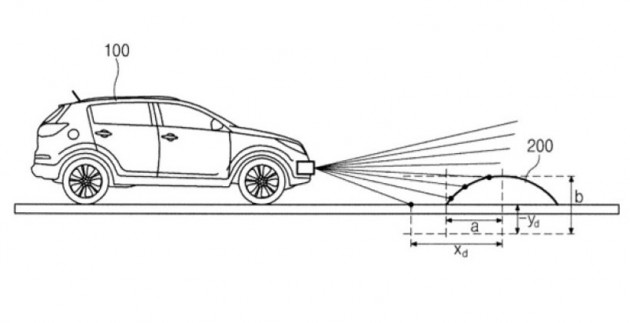 A number of “safety technology features” have been launched the past couple years to give drivers a second pair of eyes on the road–from Lane Departure Warnings to Collision Avoidance. Hyundai is adding to that list of handy doodads by developing a system that detects speed bumps. In fact, the Korean automaker has already proposed the technology via patent request.

Because the patent was filed publicly with the US Patent and Trademark Office, we can take a look at what the automaker has up its sleeve. Hyundai’s speed bump detector utilizes cameras, a GPS, and mounted sensors that measure the size and dimensions of the lump on the road. After software calculates if the driver is going “too fast” as the car approaches the bump, a warning messages tells the driver to slow down.

While your initial reaction might be–as many people’s have been–“Seriously?! Are drivers not expected to pay attention anymore?”, there’s a solid likelihood that Hyundai is developing speed bump detector technology for autonomous or semi-autonomous vehicles. While it’s not mentioned explicitly in the patent request documents, the automaker has already been hard at work preparing for semi-autonomous vehicles, including the upcoming Equus. A sensory system which identifies bumps and holes in the road will fit perfectly in the company’s technology repertoire.

For the time being, critics may complain that drivers should be able to spot and adjust for speed bumps themselves; but, it could become a crucial aspect of allowing your vehicle to drive itself in the future.