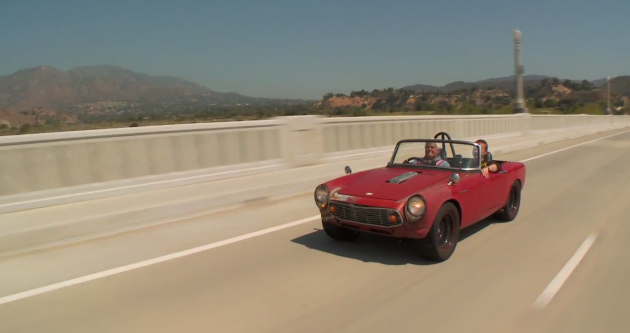 As he points out in the most recent installment of Jay Leno’s Garage, comedian and car aficionado Jay Leno already owns a gorgeous vintage Honda S600 roadster, which he featured on his web series last year.

So why did Leno decide to focus on another ’64 S600 (and one that looks decidedly worse for wear) in his latest video? Well, mainly because this one’s “more motorcycle than car”—and better for it.

The car in question belongs to Matt Brown (the Oppo writer, not the MMA fighter), who put the whole thing together for around $5,000. Brown took the junky old body of a ’64 S600 and filled it with “a lot of found parts and cheap parts,” as well as a 2015 Honda CBR1000RR motorcycle engine. (You can see his build photos here.)

He also threw a nitrous canister in the trunk, for that little bit of extra “oomph.” It makes a beautiful sound when Jay and Matt take it out onto the California freeway for a little drive.

Leno keeps referring to the cheap, souped-up S600 hot rod as a triumph of “brains over money,” and we suspect that Brown agrees, seeing as he seems to delight in sneaking the car into auto shows featuring million dollar McLarens and Porsches.