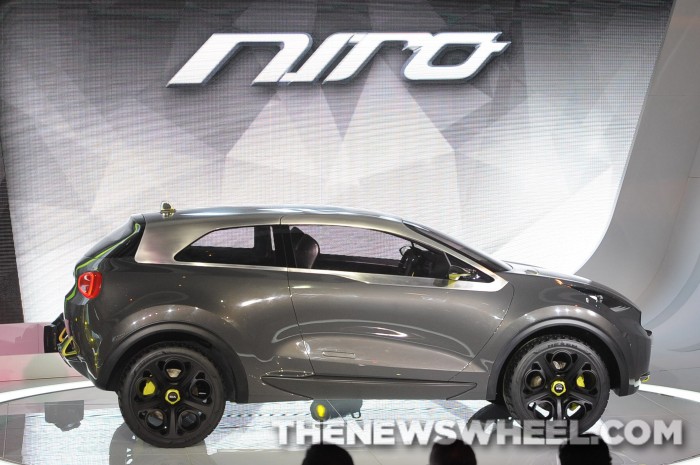 It is said that the Roman emperor Nero played the fiddle while his city burned to the ground. It was heavily suggested that Nero himself started the blaze in order to make room for his Domus Aurea (Latin for “Golden House”). And it is entirely possible (though perhaps not very likely) that Kia so chose to base the name of its Niro concept on the infamous emperor for the sole purpose of making their intention of burning the 2014 Chicago Auto Show to the ground (metaphorically speaking, considering Chicago has already dealt with its fair share of fires) abundantly clear. Because the Kia Niro Concept, my friends, is the hotness.

The Kia Niro Concept unequivocally stole the show during Kia’s jam-packed press day-opening conference on Thursday. Even wedged between more practical and popular fare like the Optima Hybrid and the much-anticipated Soul EV, the unique concept vehicle was the standout going away. Kia’s presentation cleverly centered around the evolution of the blues, which is an integral aspect of Chicago culture.

Fittingly enough, the song that was chosen to play the Kia Niro Concep to the stage was a live rendition of The Rolling Stones’ “Paint it Black.” I say it’s fitting because it’s one of those songs that you instantly recognize because it never escapes you once you’ve heard it for the first time. “Paint it Black” is a song crafted by brilliant luminaries to burrow into your very core and affect the way you look at music. Without potentially traipsing into hyperbole (as if I haven’t already done a fine enough job of just that), the Kia Niro Concept is very much that classic tune’s automotive equivalent. 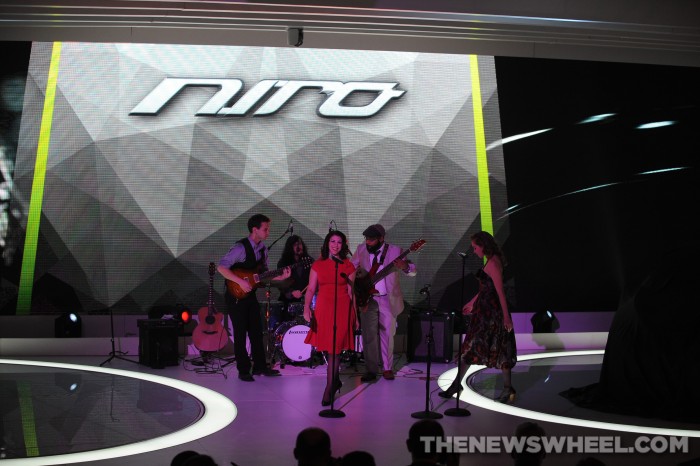 And while the exterior isn’t the jet black that the song pairing might suggest, the “Nightfall” paint scheme is certainly as menacing as the galloping tread of Charlie Watts’ drums suggesting an entity of some great dark power approaching. (See what I mean about that whole hyperbole thing?)

On first glance alone, you know that the Kia Niro Concept is quite unlike anything you’ve ever seen: it cuts a powerful figure, accentuated by a low stance and dihedral butterfly doors.

The front fascia is of particular interest with an asymmetric arrangement of air vents (comparable to that seen on last year’s Provo concept), and an ice-cube headlight arrangement, strip-style daytime running lights, and built-in quartered spot lights.

“Ten years ago, people wanted understated style in the SUV market, but increasingly, as more people migrate to the B-segment, they are looking for strong character and individuality,” said Gregory Guillaume, Chief Designer, Kia Design Center Europe.  “It may have the looks of a Dakar [Rally] contender, but Niro has a strong premium feel thanks to our innovative use of advanced and modern materials that mix brawn with spirit to deliver a playful vehicle ready to be part of anyone’s active lifestyle.”

Certainly, Niro looks like it has potential to burn CAS to a cinder in order to build a golden house for the Kia brand. For more about the Kia Niro Concept, check out Kia’s press release, and check back in with us during the week for more information and pictures fresh out of the 2014 Chicago Auto Show.