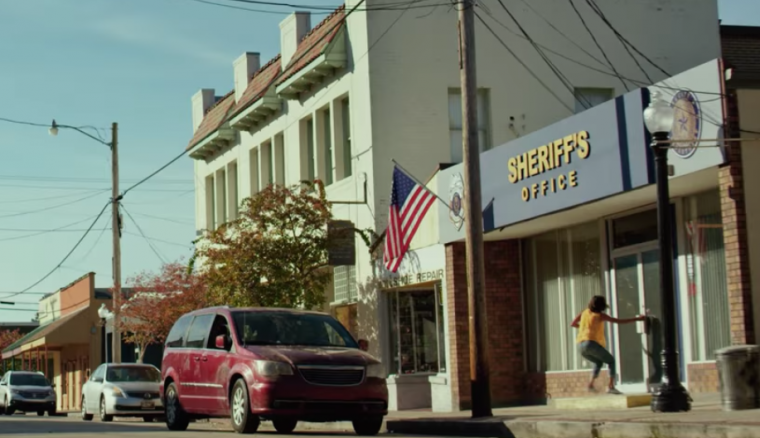 Halle Berry runs into a police station while her costar, a minivan, waits outside

In movies with memorable car chases, the featured vehicle sometimes becomes just as iconic as the film’s human star. It’s hard to think of Bullitt without picturing both Steve McQueen and the 1968 Ford Mustang GT he drives, just as Sean Connery’s James Bond will be forever linked to the Aston Martin DB5 he ejected henchmen from in Goldfinger.

The trailer for the upcoming child abduction thriller Kidnap seems like it’s setting up the same close relationship between movie star and automobile. And in this case, the star is Halle Berry and the car is a… Chrysler Town & Country.

This trailer implies that this movie features a lot of car chase scenes, in which our heroine’s Town & Country tries to catch up with the rusty old Mustang that’s holding her son hostage. We get the standard close-ups of squealing tires, a rising speedometer, and a gear stick being frantically shifted… except the car in question is a minivan, which makes the whole thing seem a bit odd.

The unorthodox choice of vehicle also makes the product placement that much more conspicuous. And if Kidnap does turn out to be a 90-minute car commercial for the Town & Country, it will be advertising an old model—the movie has been sitting on the shelf for two years, due to the production company’s bankruptcy.

Of course, maybe this wasn’t product placement! Maybe the filmmakers are trying to make a statement, both by switching up gender roles and challenging car stereotypes.

You see, most low-budget action movies feature middle-aged men driving sports cars. So why not buck convention and portray a middle-aged woman driving a minivan for a change?

I, for one, am cautiously optimistic to see if the Town & Country can spice up what looks to be an otherwise rote thriller. After all, everybody probably thought that public busses would make for crappy action movie vehicles, too, until Speed came along.