Back in December, we told you that an upcoming episode of “Jay Leno’s Garage” would feature an extremely rare 1910 Buick Bug, which is one of two ever produced and one of the first cars ever made to race. The video of Leno’s time with the Bug has made its way online, and you can check it out below.

Say what you will about Jay Leno (and one could really say quite a bit, particularly if they still feel a bit angry about that whole thing with CoCo), but the man certainly loves his denim and knows his cars. 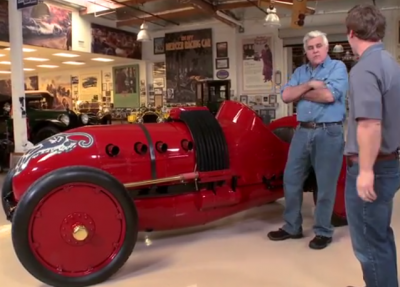 Leno brings in Jeremy Dimick, curator of the Sloan*Museum in Flint, Michigan, from which the 1910 Buick Bug is on loan to Leno, and together they talk a bit of history and a bit of shop. They discuss specs (it’s a 622 cubic-inch four-cylinder engine that only gets around 50 horses, mated to a three-speed transmission, and only rear brakes), some of the more peculiar features of the Bug (pneumatic tires and a radiator that straddles the body of the vehicle), and why it has a demonic looking ram painted on the front (“…they [Bob Burman, Louis Chevrolet, and Enos DeWaters) said they were going to buck their way back into racing”).

Of course, Leno and Dimick standing about and talking about the Bug and its history for six minutes is great and all, but knowing that it’s an episode of “Jay Leno’s Garage,” you know that Jay is going to end up taking a ride in the 100-year-old race car. He has to pump the gas into the engine as he drives and can’t get it to go in reverse for a turnaround (because there is no reverse function), but he certainly makes the 1910 Buick Bug run for all it’s worth. 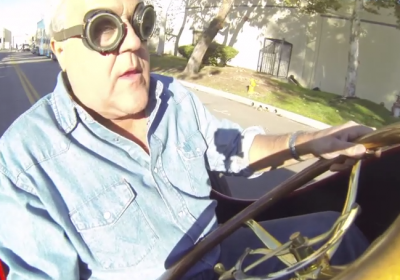 With those old-fashioned goggles on, we’d be remiss if we didn’t mention how much Leno looks like a Rocky & Bullwinkle villain. You can almost imagine The Tonight Show tied up in his lap and Jimmy Fallon giving chase. Maybe we can expect to see just that on a future episode of “Jay Leno’s Garage.”