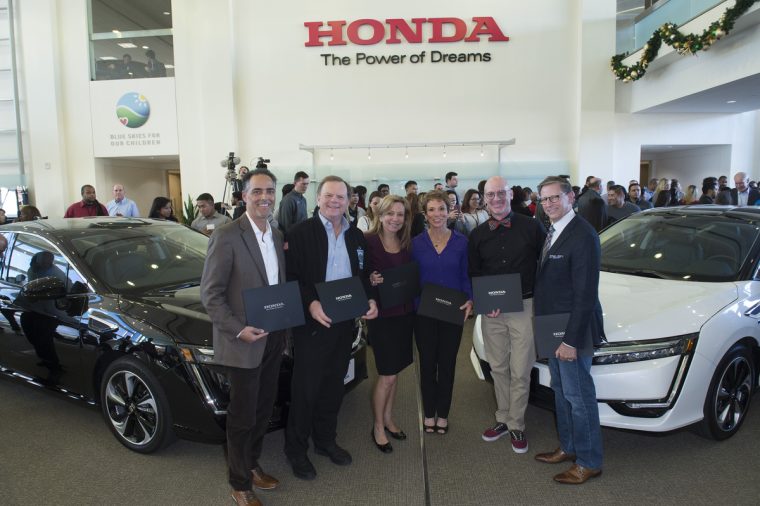 Honda has begun delivering 2017 Clarity Fuel Cell Sedans to customers at select dealerships in Southern California. Among the first six customers to receive the third-generation FCV is Terry Tamminen, the CEO of the Leonardo DiCaprio Foundation.

That’s pretty cool! I mean, that guy has to have met Leo at some point, right? I wonder if he’s nice. I always wonder if celebrities are nice.

Private securities investor Jon Spallino, who became the world’s first fuel cell vehicle customer way back when with the 2005 Honda FCX, rounds out the half-dozen initial Clarity customers, all of whom were previous owners of Honda’s second-gen Clarity FCX.

“The Honda Clarity Fuel Cell has arrived as the next big leap forward in electric drive mobility, with next-generation style, fun-to-drive performance and customer comfort,” said Steve Center, vice president of American Honda’s Environmental Business Development Office. “In the year ahead, we will continue the rollout of the new Clarity series of electrified vehicles, to include battery-electric and plug-in hybrid models.”

The Clarity, which offers a segment-best 366-mile range, is currently leasing at select California dealerships in SoCal, the Bay Area, and Sacramento. The vehicle will become available at more dealerships across California as the state’s hydrogen fueling station network continues to expand.

Those interested in joining the ranks of Tamminen and co. should visit http://automobiles.honda.com/clarity to sign up for the opportunity to become a Clarity Fuel Cell customer.