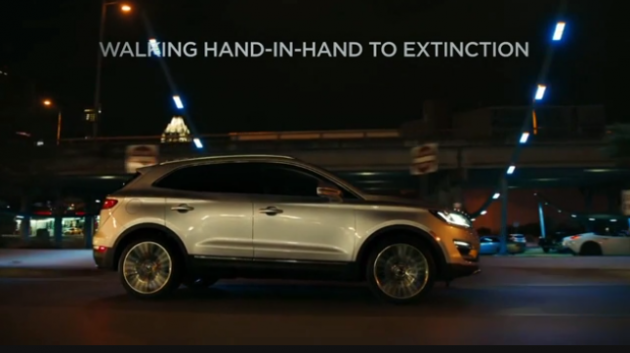 Based on the early reception, it seems that Lincoln’s partnership with Matthew McConaughey was a smashing idea. The first fruits of the collaboration between the automaker and the Academy Award-winner were unleashed upon the world last week to much acclaim.

Many commentators noted a striking similarity between the way McConaughey talks to the camera (and, in the case of the ad “Bull,” a bull) in these commercials and the metaphysical soliloquies of his character on True Detective, Rustin Cohle. Apparently, late night host Conan O’Brien was one of those who noted the similarities, and he subsequently set us up with this little gem on his TBS show.

“Clearly, the Lincoln [Motor] Company’s trying to take advantage of McConaughey’s status now as a serious actor,” O’Brien stated, “but I don’t know if he’s the right fit for this car commercial.”

He then throws to a mash-up of images from the three commercials—“Intro,” “I Just Liked It,” and “Bull.”—which has been scored by some of Rust Cohle’s greatest hits.

“People here…they don’t even know the outside world exists…might as well be living on the f***ing moon.”

“It’s all one ghetto, man. Giant gutter in outer space.”

“I think human consciousness was a tragic misstep in human evolution. We became too self-aware.”

“The honorable thing for our species to do is…stop reproducing…walk hand-in-hand into extinction, one last midnight, brothers and sisters opting out of a raw deal.”

Really makes you want to buy a Lincoln MKC, doesn’t it? All that was missing was the sounds of The Handsome Family’s “Far from Any Road,” a family of little people crafted from cut-up Lone Star beer cans, and an ashtray overflowing with vigorously-smoked cigarettes.

You can check out the original ads below.