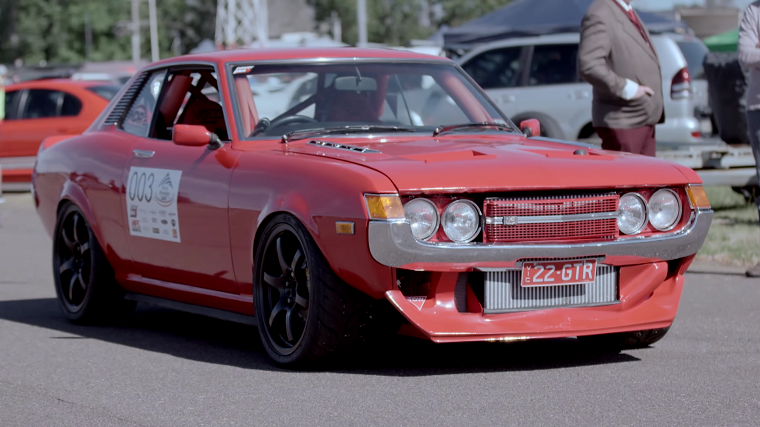 It may not look much different than a regular, first-gen TA22 Toyota Celica, but the so-called “Frankenstein’s Monster” has a lot hiding under the hood. So much so, in fact, that while the car was originally built in 1971, it would likely beat just about any production car to roll off a 2017 assembly line to a 1 km drag race.

Jamie Heritage, the man behind the project, showed off his Celica at the 2016 Snowy Mountains 1000 near the end of December, and we must say we love the way he went about describing his monster of a car. Only an Aussie could say “it pushes out about 1100-1150 horsepower at the flywheel, so yeah, not a bad little thing” so nonchalantly.

Under the hood of the TA22 is a 4.0-liter Toyota/Lexus V8 paired with a Garrett GTX45 turbo and a whole lot of Nissan GT-R parts, including the rear differential from an R33, the gearsets from an R34, and the famous AWD system from the R35. According to Heritage, the “little 22” couldn’t deal with the sort of horsepower he was pushing, which led to him replacing the old RWD drivetrain with the R35’s.

Throw in a custom sequential gearbox and Heritage’s Celica can really book it on the straights. He says it can currently go to 193 mph but that he should be able to push it past the 200 mph barrier with some adjustments, and that people usually don’t seem too interested in the car until they see it go for the first time, after which they swarm all over it.

Best part? The car is road legal and has been registered (and reliable) for six years!