Meet Steve, the Toyota Anti-Collision Dummy Who Helps Save Lives

Have you met Steve? Probably not—we only just became aware of his existence ourselves. Sure, you probably have a friend or four named Steve, but the Steve we’re referring to is actually a Toyota anti-collision dummy who helps the automaker test out its pedestrian-avoidance technologies. You know, because using a real person would be inhumane and stuff. But Steve can handle it. 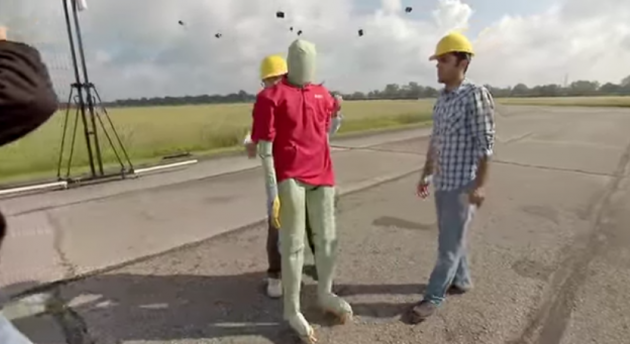 Steve, just hangin’ out with the guys

In fact, Steve isn’t the only dummy Toyota employs for this job—there’s also Steve Jr. Steve and Steve Jr. walk in front of Toyota vehicles equipped with pedestrian avoidance systems at the automaker’s Collaborative Safety Research Center, possibly with the help of birds flying around their heads. (Anyone else got a good guess as to what those black dots above Steve might be?) When Steve is in motion, his movements are more easily sensed by the car’s technology, in the same way the movements of a human pedestrian would be. In contrast, a robot’s stiff movements wouldn’t trigger the cars’ detectors well enough to be comparable to real-life driving situations.

Toyota created Steve and Steve Jr. from its crash test dummies, and similar dummies will soon be available to major automakers across the world in order to aid with testing pedestrian avoidance technologies.

Steve might be a little creepy, but we’re thankful for his sacrifice in the name of safety. Watch him in action right here: