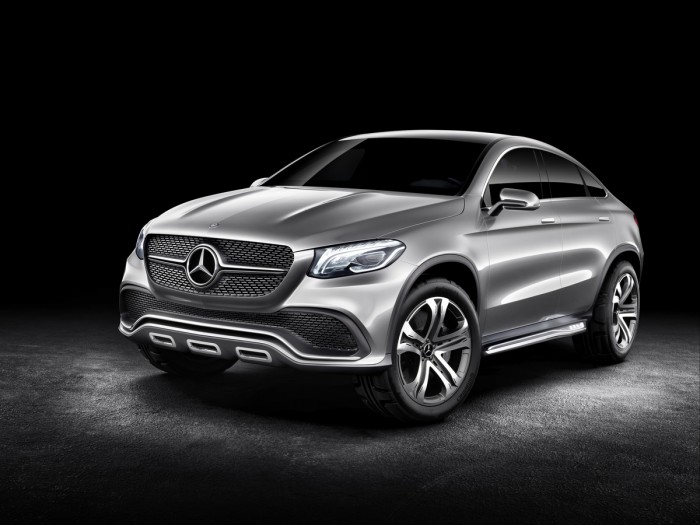 Following in the footsteps of the BMW X6, the Mercedes-Benz Concept Coupé SUV debuted in Beijing this week at the Beijing Auto Show. The Concept Coupé SUV manages to blend elements of the coupé and the SUV into one stunning vehicle. Indications of its coupé relations include the flowing side line, striking radiator grille with central chrome louvre, and stretched greenhouse.

To describe the concept, Gorden Wagener, Head of Design for MB, chose these words: “Sensual as a coupé – visionary as an SUV.” And he’s right. The Mercedes-Benz Concept Coupé SUV is nearly five meters long and two meters wide, with broad shoulders and flared wheel arches. Despite its length and width, the coupe only reaches about 1.75 meters in height.

“The Concept Coupé SUV stands out thanks to its extreme proportions and in doing so interprets our hallmark Mercedes coupé design idiom perfectly. With its superior sportiness it conveys a sense of modern luxury and aesthetic aspirations of sensual clarity,” said Wagener.

Exterior features for the concept include LED Multibeam headlamps, an upright sports grille, illuminated side sills, and direction indicators that use a moving digital light band with elements that light up in order from inside to outside. The Mercedes-Benz Concept Coupé SUV sits on 22-inch wheels wrapped in 305/45 R 22 tires.

The concept is powered by a 3.0-liter V6 that is good for 333 horsepower and 354 lb-ft of torque. The engine is mated to a 9G-Tronic nine-speed automatic gearbox on a 4MATIC permanent all-wheel-drive platform.

So will the Mercedes-Benz Concept Coupé SUV ever come to production in some shape? Seems likely, as Mercedes even reported they were “announcing the possible expansion of the previously uniform SUV off-roader family.”