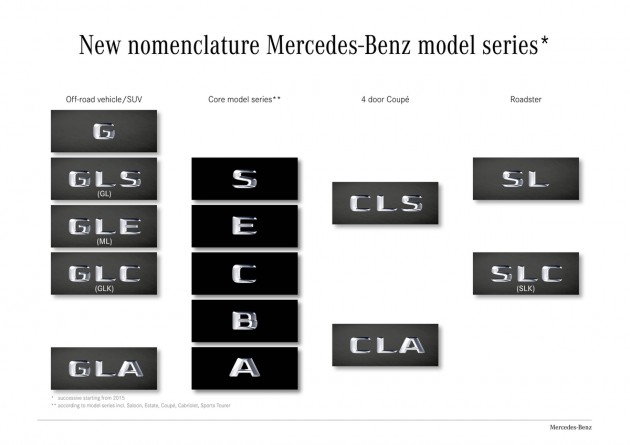 Mercedes-Benz’s 2016 model year lineup will be coming at us next year with a handful of new and different names. Don’t get too excited, though. It’s still going to be the typical luxury vehicle alphanumeric language, but at least it will be considerably more streamlined.

“After more than 20 years of continuity involving some of the most recognized and successful product names in the world, we are now making our system of vehicle nomenclature even more understandable,” said Dr. Jens Thiemer. “Now is the ideal time to do this, for in 2015 we will be updating virtually our whole SUV model range, providing us with the perfect starting point for renaming the whole family of vehicles.”

The changes to model names are relatively small, affecting the SUV lineup from almost top to bottom. The idea, it seems, is to use the third letter of each class name to indicate a spiritual kinship with a core model (e.g. the GLS indicates the GL-Class version of the S-Class).

The changes are as follows:

Other changes include the SLK roadster becoming the SLC roadster (indicating kinship to the C-Class) and the announcement of a new Mercedes-Maybach S-Class. 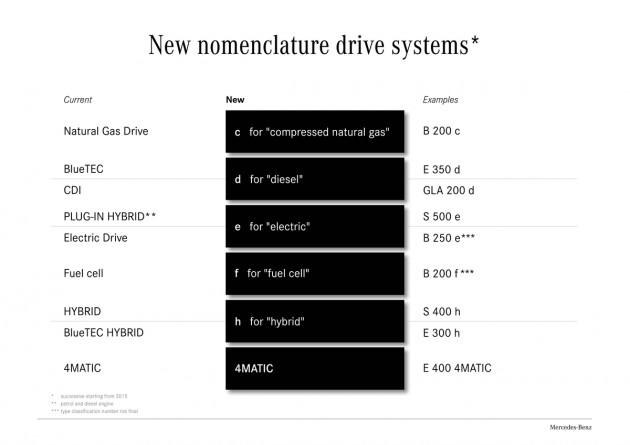 Additionally, Mercedes will change designations of future vehicles under the BlueTEC and Natural Gas Drive umbrellas with a simple, one lower-case letter signifier. These are as follows:

“More clarity, more transparency, more consistency for Mercedes-Benz customers – we are convinced that our new nomenclature will support us in achieving this objective,” added Thiemer.