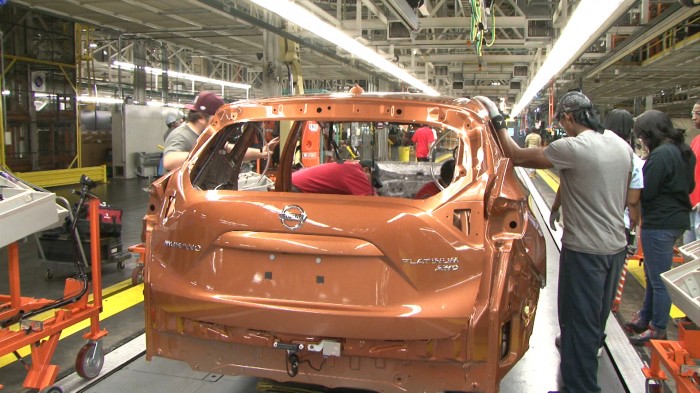 With production of the 2015 Murano set to get under way later this fall, Nissan will help its Canton Vehicle Assembly Plant gear up for the job by adding 500 new jobs. The move is the latest in Nissan’s push to make the Mississippi plant one of its global production linchpins.

“Recruiting efforts and preparations for the start of Murano production this fall are underway and current employees are excited to add this vehicle to the list of outstanding cars and trucks built in Mississippi,” said John Martin, senior vice president, Manufacturing, Supply Chain Management and Purchasing for Nissan North America. “The addition of Murano to our portfolio, coupled with the continued growth and success of the Canton plant, will move us even closer to our goal to build more than 85 percent of the vehicles we sell in the U.S. right here in North America.”

Gallery: The 2015 Murano Being Built at the Canton Vehicle Assembly Plant

Since first being announced in November 2010, Nissan has invested more than $2.6 billion in the Canton Vehicle Assembly Plant. The addition of 500 jobs pushes the facility’s workforce past the 6,000 employee threshold for the first time since is May 2003 grand opening. The construction of a new on-site supplier park should coincide with the start of Murano production later this fall.

The Nissan Canton Vehicle Assembly Plant is a 4.2 million square-foot facility that is responsible for the production of the Altima, Armada, Titan King Cab and Crew Cab, Frontier King Cab and Crew Cab, Xterra, and NV commercial vehicle and multi-passenger van.  Current annual capacity is set at 450,000 vehicles, and more than 2.6 million vehicles have been produced in its 11 years of operation.