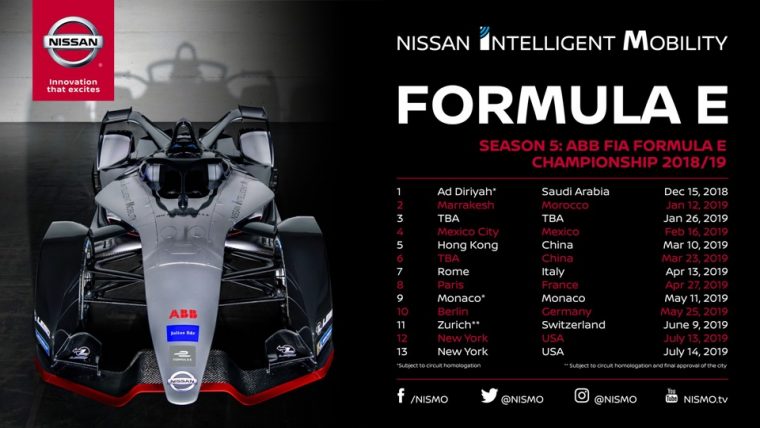 The fourth season of Fomula E racing isn’t even over yet and already organizers announced this month the locations for the fifth season. So far, 13 races are scheduled in 12 cities. New York City once again has the honor of hosting two races in the summer to close out the championship, and leaders scheduled two races in China.

Ready to Upgrade to Electric? Check out what you need to know before buying a new car

At the Tokyo Motor Show late last year, Nissan announced that it was ready to join the Formula E racing series, joining its alliance partner Renault on the track. The Japanese automaker decided to wait to hit the track until the fifth season in 2018-2019, even though it made the announcement well before the start of the fourth season.

As of this article’s publication, organizers have scheduled the Formula E series to visit 11 large cities in 10 countries. One race in China will be in Hong Kong, and the other will be in a yet-to-be determined city. The race scheduled for Jan. 26, 2019 still does not have a city or country to call home.

“This incredible race schedule highlights markets where electric vehicles are ideally suited for urban driving,” said Michael Carcamo, Nissan’s global motorsports director. “That’s the great thing about Formula E – we get to race on the same roads where the Nissan LEAF could be driven by fans every day.

“Formula E takes the action to the people – racing in the middle of cities, rather than at race tracks miles away in the countryside.”

Regardless of where the races take place, we’re excited to see Formula E racing expand and bring its message of greener driving with it. Nissan leads the way with its best-selling Nissan LEAF EV, and now it’s time to see how it stacks up against more performance-oriented EVs.