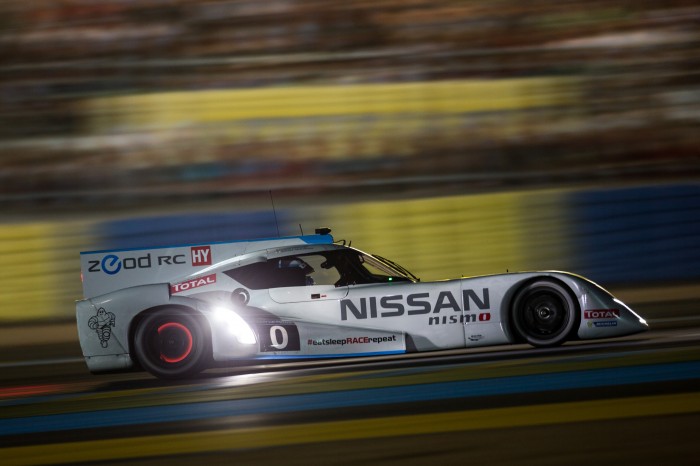 Before coming into this year’s 24 Hours of Le Mans race, Nissan set a couple of major goals for their all-electric ZEOD RC. One of them: set the speed record for an electric vehicle. Driver Satoshi Motoyama did just that in qualifying when he got the ZEOD up to 300km/h on the Mulsanne Straight.

Motoyama checked the goal off of Nissan’s list in his first run on Thursday night. In a bit of portentous foreshadowing, Motoyama was unable to test the car on Wednesday due to a gearbox issue. The ZEOD was ultimately forced out of Le Mans action on Saturday due to a (presumably similar) problem with the gearbox.

“I drove ZEOD at Le Mans for the first time and instantly we were able to reach our target to run at more than 300km/h with electric power only,” said Motoyama. “I was so surprised with the speed and power of electricity and it felt great. In yesterday’s session we had some trouble with the gearbox in the first session then we had a heap of red flag periods and I didn’t get the chance to get into the car. But the guys on the team did a great job to fix the car and I and I was able to get started tonight right at the green flag tonight. Our first target of the top speed of 300 km/h with electric power is done and I think that was a really good first step.”

Nissan’s second goal of achieving an all-electric lap at Le Mans was achieved this morning mere hours prior to being knocked out of the race. With its name already etched into history, the team behind the ZEOD will no doubt have its eyes on a greater prize—that being total Le Mans victory—at next year’s race.