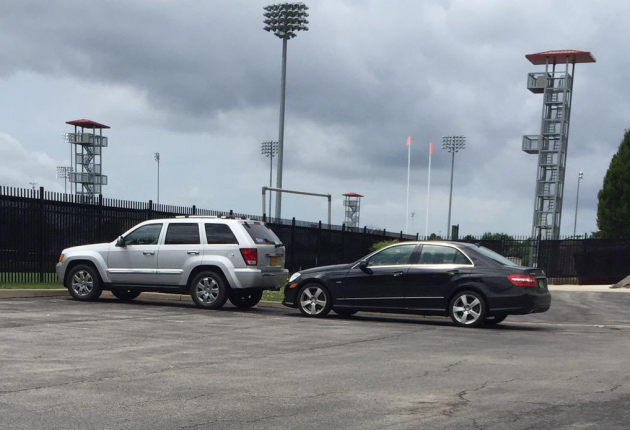 Ohio State coach Urban Meyer is all about discipline and decided to teach some unlucky person a lesson for stealing his parking spot at Ohio State’s Woody Hayes Athletic Center.

Running back Warren Ball Jr. tweeted a picture on June 15th of Coach Meyer’s Mercedes blocking in a Jeep Cherokee. “(This is) what happens when you park in Coach Meyer’s spot lol blocked in until he leaves,” Ball said in the tweet.

Ohio State site Eleven Warriors reported the Jeep probably is property of OSU kicker Josh Willoughby. The Jeep has Duke decals on it, which is the school Willoughoy attented before transferring to Ohio State. The Jeep also sports an Alaskan license plate and Willoughby previously lived in that state, according to Duke’s Web site.

Via our @EricSeger33, Urban appears to have trapped an Alaskan Duke fan at the WHAC. http://t.co/vWIj8PH5ZI pic.twitter.com/aRB1MEW35j

Auto News: Behind The Scenes Of The Ford GT Design

Meyer is considered one of the hardest workers in college football, so it’s very unlikely he decided to leave the office early and give the Jeep Cherokee a break. If the Jeep is indeed Willoughby’s, then he’s getting the message very quickly that coach Meyer demands absolute respect and mistakes won’t be tolerated.

Who said kickers had it easy?