Own Frankenstein’s Corvette From Death Race 2000 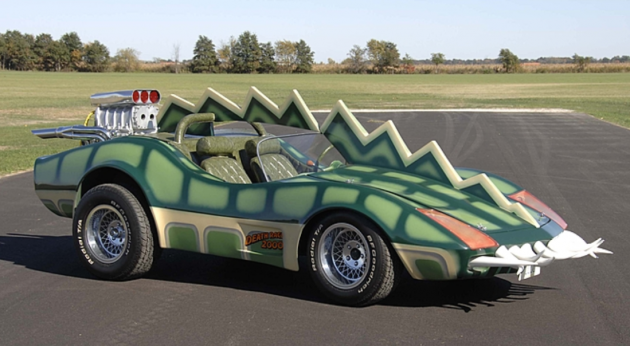 If you’re a fan of Death Race 2000 (the original, not that crappy Jason Statham remake) you’d better start planning to attend the Mecum Auction in Indianapolis, May 12th through 16th.

The Roger Corman-produced 1975 camp classic Death Race 2000 portrays a dystopian 21st century America in which people are entertained by the murderous Annual Transcontinental Road Race. Racers get extra points for killing pedestrians, and the best driver among them is Frankenstein (played by David Carradine), a supposed half-man, half-machine hybrid.

Frankenstein’s signature ride is a custom alligator-themed 1975 C3 Corvette. The vehicle is, appropriately enough, sort of a Frankenstein’s monster itself: builder Dean Jefferies actually used a Volkswagen platform and mocked it up to look like a C3 Corvette. The vehicle uses a Chevrolet Corvair’s air-cooled flat-six engine, which is hidden in the rear behind the mock engine on top.

Designed by James Powers, Mecum is only expecting this car to sell for $20,000 to $25,000, which sounds like a steal to us. This thing would make one hell of a daily driver (as long as you don’t drive it like Frank did…)