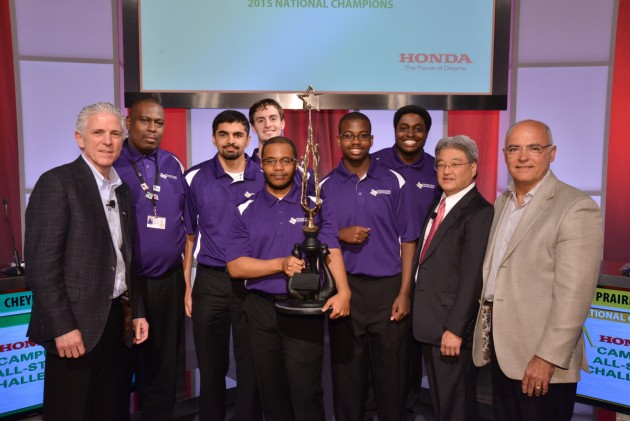 March Madness may be still going on, but March’s other collegiate competition has already wrapped up, with Prairie View A&M University winning the 2015 Honda Campus All-Star Challenge National Championship title.

Prairie View’s winning team was comprised of team captain and senior Joseph M. Dowell, senior Brannon A. Billings, sophomore Eric Cole Johnston, and freshman Chayse Lavallais. In addition to the title and trophy, the four students combined to earn their school a $50,000 institutional grant from Honda.

“Coach Thomas and his team could not be more deserving of this victory,” said Prairie View A&M University President George C. Wright. “Prairie View is honored to help shine a light on the ways that HBCUs all across the country are helping young people realize their dreams.”

“Honda congratulates Prairie View and all of the student competitors, volunteers, staff and fans who helped make this year’s competition truly unforgettable,” said Steve Morikawa, American Honda’s Vice President of Corporate Community Relations. “We are very proud of the healthy, competitive spirit that was on full display throughout the event, as well as the enduring bonds that players formed between matches. We hope they all remain friends for life.”