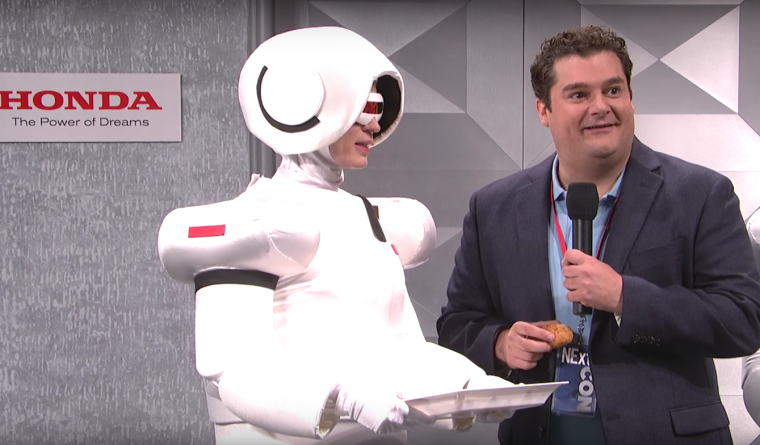 Emily Blunt hosted Saturday Night Live this past weekend, to middling results. Blunt, who was there promoting her new film The Girl on the Train, was a game and talented host, but the episode itself was largely forgettable.

The most memorable moments came in the opening sketch, a parody of last weekend’s presidential debate between Hillary Clinton and Donald Trump—an event that seemed too absurd to satirize, but apparently wasn’t. Alec Baldwin’s Trump stalking Kate McKinnon’s Clinton like the shark from Jaws was a high point that the episode never reached again.

But Donald Trump was not the only public figure whose weird, awkward movements were mocked by SNL. The late-night comedy institution also took aim at the… Honda ASIMO?

This skit suffers from a weak premise, but it has a few things going for it. For starters, Leslie Jones continues to excel at playing no-nonsense workers with little patience for customers and/or broken equipment. Also, as one of the malfunctioning robots, English actress Emily Blunt proves she’s not just capable of a good American accent, but a good robot accent, as well. In fact, her awkward pronunciation of “quesadilla” may be the funniest thing about the whole sketch.

However, it’s a bit strange to see Honda drug into this skit. For the record, there is not a female “ASIMA” that pairs with the ASIMO. Also, the real ASIMO robot is not adversely affected by the use of cell phone data.

The ASIMO suits are pretty good, though. Maybe one of the show’s writers wanted an ASIMO costume for Halloween, and writing this skit was the easiest way to get one? Hard to say.

Honda Robotics: Honda working on a self-driving car that can talk to you about your feelings