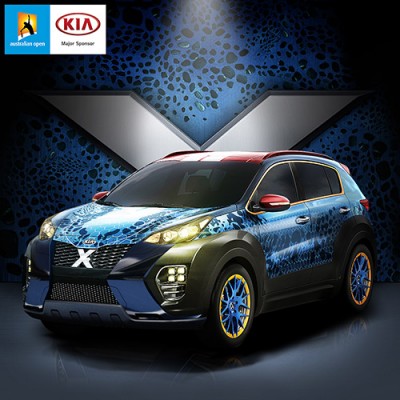 Kia is taking its brand transformation to the next level, shifting its shape into something straight out of the X-Men film franchise. As part of its ongoing collaboration with Twentieth Century Fox and the X-Men movie franchise, the Korean carmaker recently released its second-generation Kia X-Car—a Sportage CUV inspired by Mystique, the famous shape-shifter.

The one-of-a-kind Sportage not only mirrors Mystique’s appearance, but also her power. In an online video, which will release on January 4th, you can catch this superhuman car join forces with tennis pro Rafael Nadal as they take on the X-Men’s arch-villain Apocalypse.

Throughout the video, which is part of Kia’s sponsorship of the Australian Open 2016 tennis championship, we get a glimpse of the crossover’s custom-designed bodywork with special textured ‘tone-on-tone’ matte and gloss blue paint finish. It even has red and yellow highlights throughout the body to truly mirror Mystique’s look. It’s quite the impressive vehicle.

Kia’s Crown Jewel: See why the 2015 Kia Sedona is worthy of a crown

Even Jennifer Lawrence, who plays Mystique in the franchise, approves.

Kia plans on displaying the car in Melbourne, Australia, before the X-Men: Apocalypse’s global release in May 2016. It will be on display at the Australian Open 2016 in January at Melbourne Park. This Mystique-inspired Sportage joins the brand’s clawed Sorento, which is inspired by Wolverine.