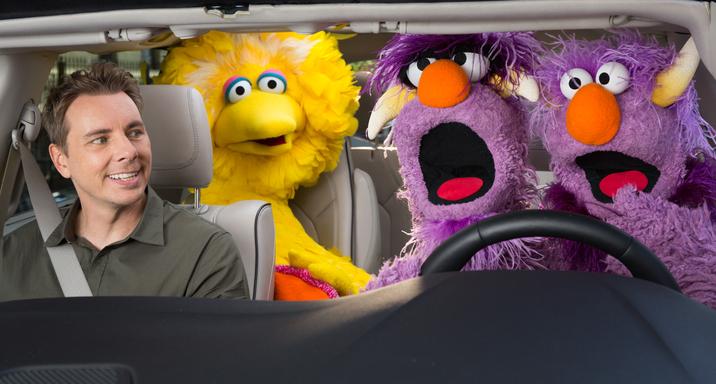 As the proud owner of a two-and-a-half year old daughter, I am more familiar with the gang from Sesame Street than ever before. I frequently find myself humming “The Number of the Day” and “Elmo’s World,” and I honestly feel like Oscar the Grouch is a good friend. Now, as an automotive writer, I find my professional and home lives colliding like an out-of-control freight train as I watch a new commercial for the Chrysler Pacifica minivan starring none other than the Two-Headed Monster and Big Bird, who are here to teach us all about hybrid technology! Check it out.

The commercial, titled, “It’s Electric,” (no boogie woogie woogie), features the Two-Headed Monster driving the Pacifica Hybrid with actor Dax Shepard in the passenger seat and Big Bird in the rear. The three pull up to a stop sign, where the Two-Headed Monster notices a sign pointing gas car drivers in one direction and electric car drivers in the other direction. There is much confusion as each of the Monster’s heads tries to decide which way they should go to refuel. Dax Shepard jumps in to explain that the minivan is, in fact, a hybrid, which runs on gas AND electric. Like, whoa!

Of course, neither head can decide which way they should go, so Dax offers to drive, which leads to an argument as Big Bird and Dax try to convince the Monster to give up control of the wheel.

This commercial is the latest in a line of videos featuring Sesame Street characters and the Chrysler Pacifica. The partnership was first announced in July and, since then, Sesame Street favorites such as Bert and Ernie, Grover, Elmo, Abby, the Count, Cookie Monster, and more have made appearances.

If you’re looking for more Sesame Street fun, check out Chrysler’s YouTube page, or hit up the Sesame Street channel to see some of their hilarious parody videos.

Buying Used: How to pick the perfect pre-owned car