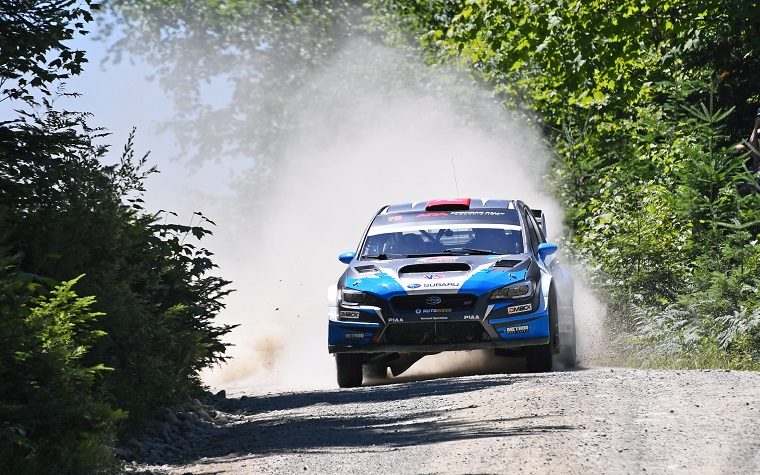 The NEFR is the fourth of seven rounds in the American Rally Association National Championship and one of the toughest of the season. It’s a two-day stage rally that takes place on the back roads and logging tracks of western Maine and northern New Hampshire. They’re dusty and require good technical ability.

Despite the challenges, both Subaru teams were able to run trouble-free, unlike its closest rivals. Barry McKenna suffered from brake issues and Ken Block crashed his car, which was subsequently destroyed by a fire.

In fact, such was Subaru’s dominance its only real competition was itself. Higgins was in one car and Travis Pastrana in the other, and on the first day of the 2018 New England Forest Rally, they won every single stage between the two of them. But of the two, Higgins seemed the better suited to the new 2018 ARA regulations.

“These updated STIs accelerates faster, brake harder and they fly better! It was great fun, but David just really got us on that final stage on the first day, and there was no way to catch him unless he made a mistake,” Pastrana said.

“I wish I had popcorn in the car because watching where his lines were, I was just floored with how clean they were. Vermont SportsCar gave us a great car this weekend with absolutely no issues and the guys were perfect all weekend.”

Related: Check out Subaru’s most recent awards and accolades