Tesla Stores: What Are They and How Are They Different Than Dealerships? 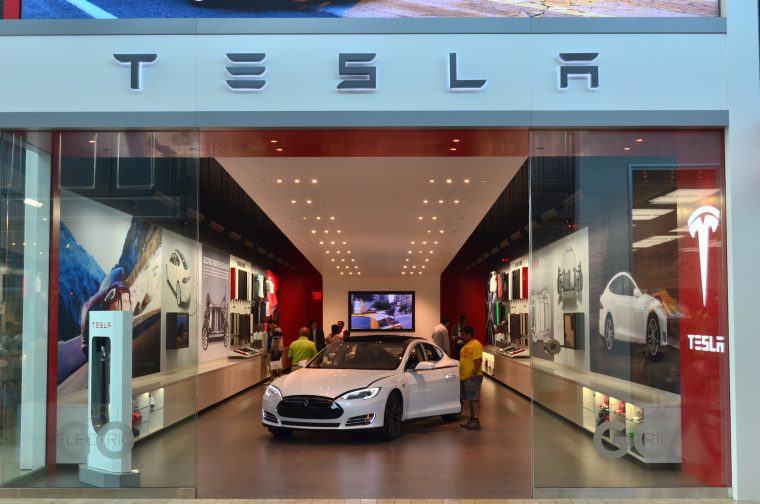 Since the day Elon Musk brought Tesla into the automotive world, he has been reshaping the way we look at the car-buying process.

Traditionally, car dealerships have been individually-owned franchises. Automotive manufacturers supply the dealership with inventory and they sell them for a profit. In fact, many states have legislation requiring car sales to be this way.

Unfortunately, not many people are excited to go to a car dealership. Dealerships have been stereotypically branded as pushy and intimidating, with a salesperson following you around and trying to up-sell you every step of the way. Tesla is actively working to avoid being lumped into that stereotype. In fact, they’re trying to make Tesla appear just like any other retail store.

How is Tesla different than regular car dealerships?

Rather than working like a franchised dealership, Tesla skips the middle man and sells directly to its customers. Tesla doesn’t have dealerships, they have Tesla Stores, and they’re usually found integrated into a popular mall or shopping center. This is a calculated decision; by placing their stores in populated areas, busy traffic flows in and out of the stores regularly, even if it’s just to see what all of the hype is about.

But Tesla Stores work differently than car dealerships, primarily because customers can’t buy a Tesla in the store. Because of the franchise laws surrounding car sales, Tesla customers have to purchase their vehicles online. Automotive manufacturers are prohibited from in-person direct sales. So if you buy a car off a lot, you’re buying from a franchised dealership.

So what’s the purpose of Tesla Stores?

Instead of selling you a car, Tesla Stores simply exist to give customers a place to see sample vehicles and get more information. This format entirely removes the stereotypical sales-pitch that often comes with a car dealership; the people working in the Tesla stores are not trying to sell you a vehicle. They’re there to educate you. And that’s a completely different mindset.

Having a place to educate consumers about Tesla vehicles is useful, especially in an ever-changing auto industry. With hybrid and electric vehicles moving toward the forefront, more and more people are seeking information on how they work and the benefits to driving one. These stores are working to educate the public, even if they don’t pick out a Tesla for themselves.

I went into a Tesla store to see it for myself. The Product Specialist explained to me that their goal is not to sell you a vehicle. To paraphrase his words, “We know that most of the people who walk in that door don’t plan on buying a car,” he said. “Our goal is to inform people that these are the kinds of cars that are out there, and they are becoming cars that everyday drivers can afford.” The specialist, of course, was referencing the new, more affordable Tesla Model 3.

Doesn’t that cause some tension between Tesla and regular car dealerships?

Tesla has directly addressed the franchising of car dealerships in the past. “The U.S. automotive industry has been selling cars the same way for over 100 years and there are many laws in place to govern exactly how that is to be accomplished,” Elon Musk said. “We do not seek to change those rules and we have taken great care not to act in a manner contrary to those rules.”

Despite their efforts to ease tensions, Tesla’s business model is accentuating the problems running rampant with the traditional car dealership model.

But Tesla doesn’t see it that way. Instead, the company believes its stores are reaching an entirely different set of customers than those shopping at a traditional dealership.

Tesla claims that most people walking into a car dealership already know which vehicle they want, and the dealership helps them obtain it. According to Tesla, they have no interest in those customers; Tesla’s goal is to reach car customers that haven’t made up their minds yet. That’s why they choose areas with high-traffic: to get the word out. “Tesla, as a new carmaker, would therefore rarely have the opportunity to educate potential customers about Model S if we were positioned in typical auto dealer locations.”

So what can car dealerships do differently?

When a customer enters a dealership, much of their skepticism is founded on the idea that they’re going to be ripped off. Customers are often uncomfortable with negotiating, because they’re not sure whether or not they’re getting a good price. Dealerships can follow the lead of Tesla by educating their customers about their options.

If a customer is looking at a 2018 Toyota Corolla on your lot, instead of throwing prices around and mentioning what a “great deal” it is, start by talking about the features and the great things about the car. Educate them on the gas mileage, the brand and its reputation, and other features on the vehicle they might not otherwise know about. And if their lifestyle seems to suit another vehicle, make a suggestion for an alternative.

If dealerships are worried about Tesla stealing their customers, they may also need to increase their digital marketing. Most customers have made up their minds before they step foot on the dealership lot because they’ve done their research at home. If dealerships do more to maintain their digital presence, they have a better chance of reaching customers earlier.

Tesla is rivaling car dealerships every day with their unique business model, and they’re doing it well. The boom of direct sales in the automotive world could be game-changing for the industry, and Tesla seems to be taking the reigns.