The Chrysler Portal Concept Looks Even Funkier in Person [Photos] 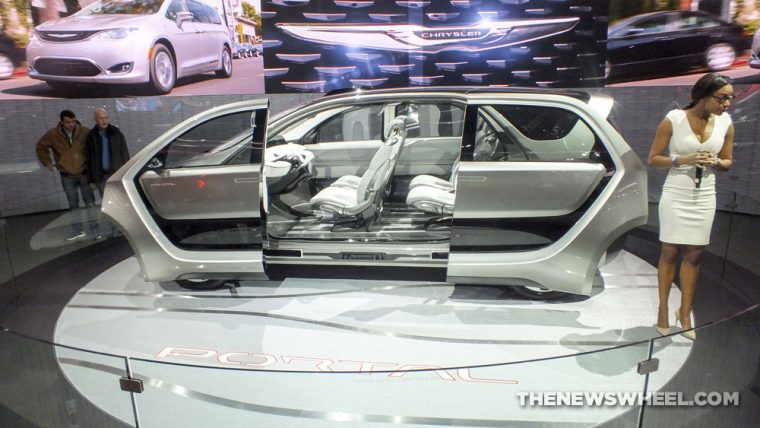 Hidden at the back of Chrysler’s display at the 2017 Detroit Auto Show was the new Chrysler Portal Concept, which made its world debut earlier this month at the Consumer Electronics Show in Las Vegas.

This all-electric model uses the same platform as the award-winning Pacifica minivan, but it comes with a futuristic design that gives it a personality all its own. Right away, many people will notice the Portal’s enormous double-sliding doors that provide access to its unique cabin. The seats in the Portal are mounted on a track that allows them to slide forward and backward. What’s more, these seats can fold downward or be removed all together to increase cargo space, but the distinctive exterior and interior designs only tell part of this van’s story.

Truth vs Rumors: Check out about Jeep’s actual plans for its upcoming Wrangler Pickup

That’s because the Chrysler Portal Concept is powered by a 100-kilowatt-hour lithium-ion battery pack that is located beneath the floor. When this battery is fully charged, the Portal Concept can travel up to 250 miles using only electric energy. In addition, the Portal Concept is capable of Level 3 autonomous driving, meaning it can drive itself under certain conditions on the highway.

While this vehicle might seem like it’s years away from being produced, FCA boss Sergio Marchionne recently told The Detroit News he would like the Portal Concept or a similar vehicle to go into production by 2019. Furthermore, FCA Head of Passenger Cars, Tim Kuniskis, told the same publication the Portal Concept represents the fifth-generation of family vehicles. The first four being the station wagon, minivan, SUV, and crossover. The Portal sets itself apart from those vehicles because it’s totally electric, capable of autonomous driving, and is fully connected.

Even if this model does eventually go into production, that still years away, so the best way to see this model before then is to head to the 2017 Detroit Auto Show. The last day to attend this year’s event is Jan. 22.

Shopping For A New Car? You should learn the meaning of these terms before visiting a dealership