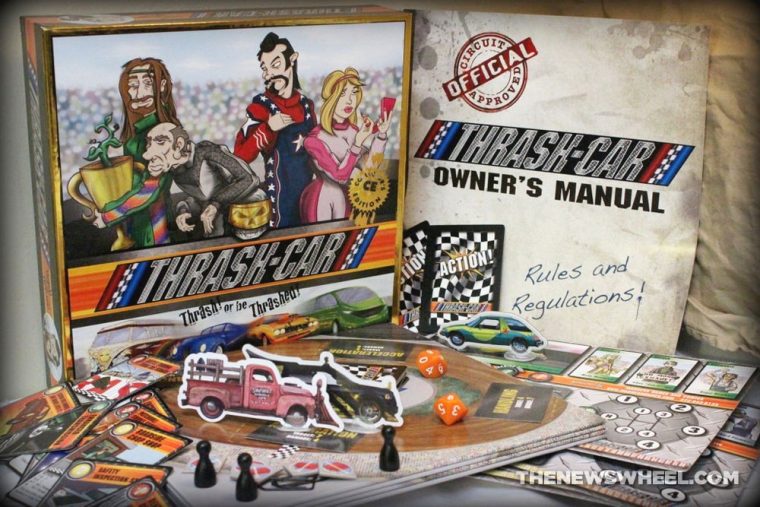 When can you win a racing board game without crossing the finish line? When you’re playing Thrash-Car!

For those who thought that tabletop versions of racetrack competitions were too tame, uncompetitive, or commercialized, this wild game pits players against each other in aggressive automotive attacks. Whether you side with the hippies, rednecks, old folks, or soccer moms, your team will be prepared to send others crashing into the wall.

As the title suggests, Thrash-Car is more about attacking other cars than racing. However, it’s not entirely a destruction derby game, as players can still win by completing the race. Originally funded as Kickstarter project in 2013, Thrash-Car is a riotous, reckless ride.

Love Racing Board Games?: This classic board game is pretty much the best NASCAR game ever 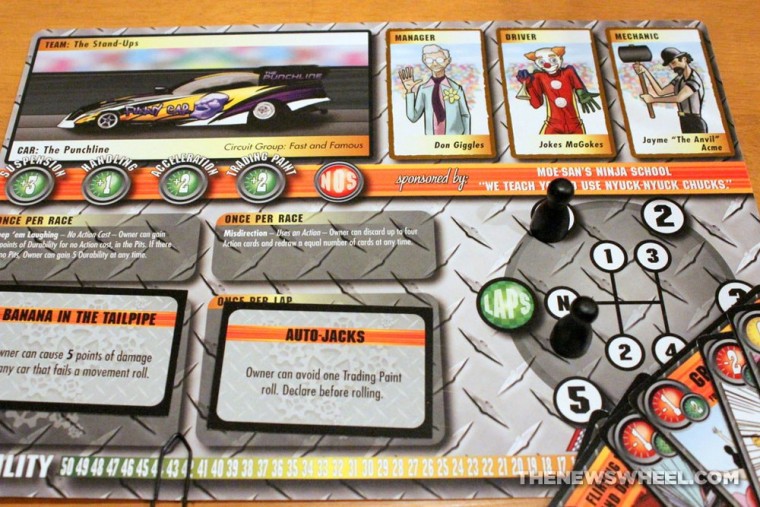 To win Thrash-Car, either be the first race car to cross the finish line or the last car standing.

To start, the group decides on a track type (three options varying in size) and number of target laps. Then, players choose a team/car; available actions, enhancement abilities, progress, and damage are tracked on each player’s individual, corresponding crew placard. Once tokens and a starting hand of cards are divvied up, the race–or thrashing–begins!

Players attempt to move their car forward on the racetrack by reaching a minimum threshold number, calculated by combining car stats, action cards, and a dice role. Other players can inhibit a person’s advancement by playing negative cards on them. If a player is unsuccessful in moving forward, their car takes damage. Damage can also be caused by directly attacking opponent cars on the same space (“trading paint”).

As damage accumulates and the durability of a car decreases, cars can take pit stops to regain durability points. Otherwise, the car is eliminated once their durability is reduced entirely. Once eliminated, players can still participate in aspects of the game by taking revenge during opponent movements. 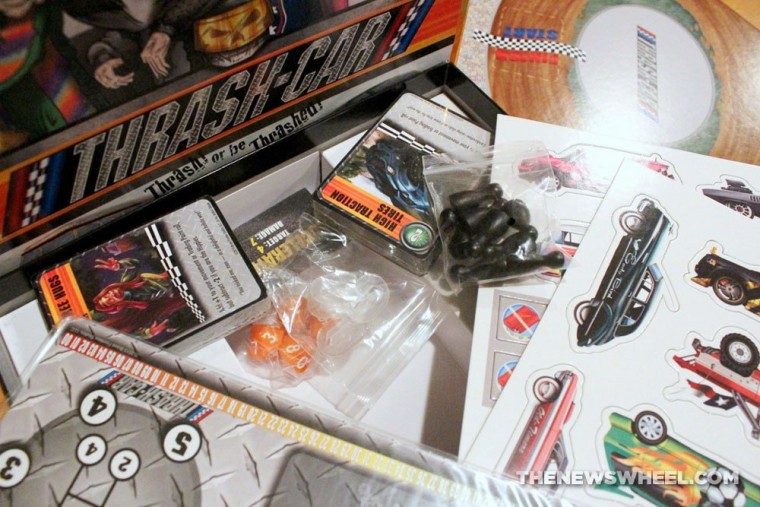 The Collector’s Edition of Thrash-Car adds the Fast & Famous teams, which include:

Upon opening the Thrash-Car box, I was struck by how secure the components were; it’s one of the most thoroughly packaged games I’ve seen. The cards are all independently shrink-wrapped and the small items separated into miniature sealable baggies. The race car tokens punch out of their cardboard frame without any tearing. And with a couple of your own rubber bands, the components fit perfectly back into the sectioned trough with no rattling around inside the box.

All the pieces are made of quality materials and don’t feel like they’ll fall apart with regular use. The printing is crisp and vivid, while the artwork and flair text on the cards are truly comical (they add a lot to the game’s fun factor). 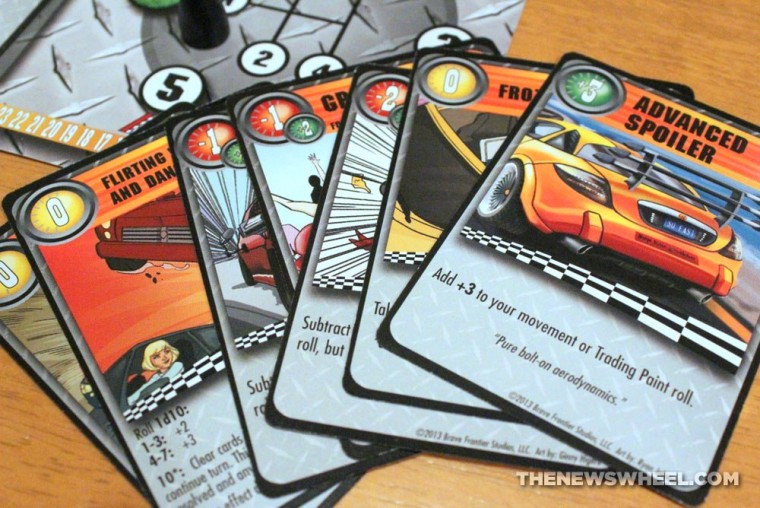 One flaw of the components is the size of the token stands, which are not tall enough to clip to the middle of the race car tokens. They can fit on the front wheels of the car, but they’re not very balanced that way. The publisher has admitted to miscalculating the size of the stands so it is a known issue, but these plastic pieces can be found for cheap elsewhere if you want to put one clip on each wheel (which is what I recommend doing).

Personally, I’d prefer that the cars were a bit smaller, which would make it easier to use the plastic stands on the cars, to fit multiple cars on the same space, and to see the track cards underneath them, which are covered up by the large car tokens. But, the car artwork is entertaining, so I can understand wanting to maximize their size.

If you think you’re going to enjoy playing Thrash-Car, spend the extra $5 and go with the collector’s edition. You basically get an in-game expansion that isn’t available on its own: the Fast and Famous crews. Buying those additional teams gives more re-play value and saves you from the frustration of buying the basic set and wishing later you’d forked over the extra money. However, they’re not essential if you do stick with the basic edition. 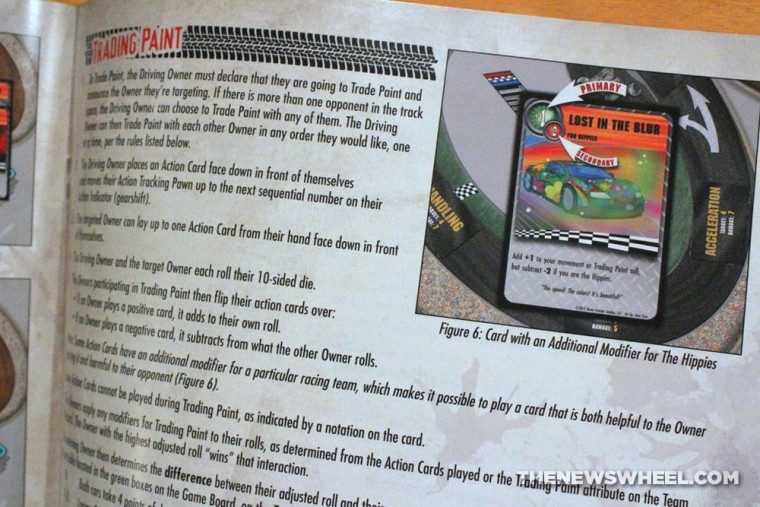 The instruction booklet–labeled as the Thrash-Car owner’s manual–was clearly written by people who have read a lot of instruction guides and wanted to make this one as coherent as possible.

A precise balance of being thorough without overwhelmingly wordy, these directions are mostly clear and well-organized, able to be read and understood in 15 minutes. The booklet not only explains the game direction in numbered steps, but is accompanied by diagrams, example scenarios, and a term glossary (if only more games had that!).

There are a few aspects that could use more attention (such as explaining the NOS button more and if we’re allowed to do the same action multiple times), but for the most part, these instructions are above average in their composition.

The directions also mention a number of simple but effective rule variations to the game, such as Changing Race Conditions and Pits Tow.

Teaching Thrash-Car to new players isn’t difficult as long as the teacher has a good grasp on the game beforehand. Showing how movement and trading paint work is enough to get the ball rolling for everyone participating. Player don’t need to experience an entire run-through to grasp the game enough to develop a strategy; within one round, participants will be comfortable enough to develop a plan that holds up against more experienced players.

Ride on the Hollywood Fast Track: Read our review of the official Fast & Furious board game! 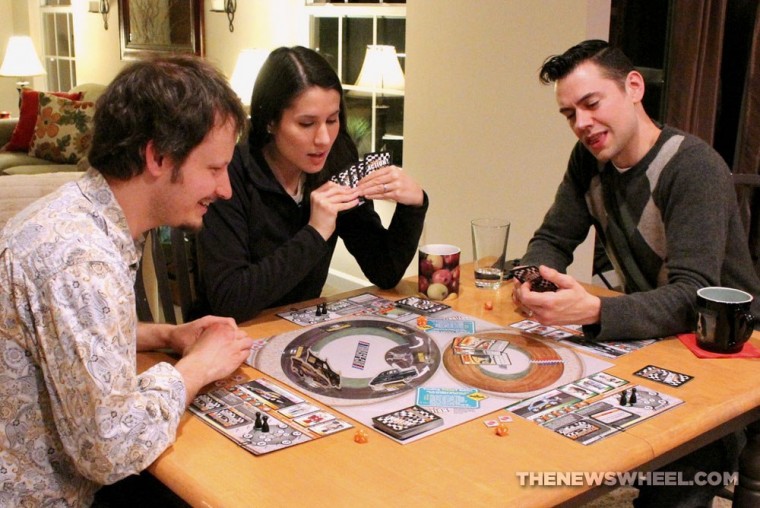 If all the racing board games on the market have begun blurring together to you, Thrash-Car is the antidote that puts humor and innovation back in an oft-neglected and under-performing genre.

While the majority of racing games focus on developing either unique game mechanics or memorable thematic designs, Thrash-Car does both. Not only is the game vivid and entertaining in design, it’s filled with highly-competitive aspects that merge elimination tactics with head-to-head racing.

Thus, it incorporates a lot of different mechanics: hand management, dice rolling, screw-your-neighbor actions, and token-board movement. The final product is a good balance of strategy and risk, combining the effects of both numbered action cards and dice rolls. 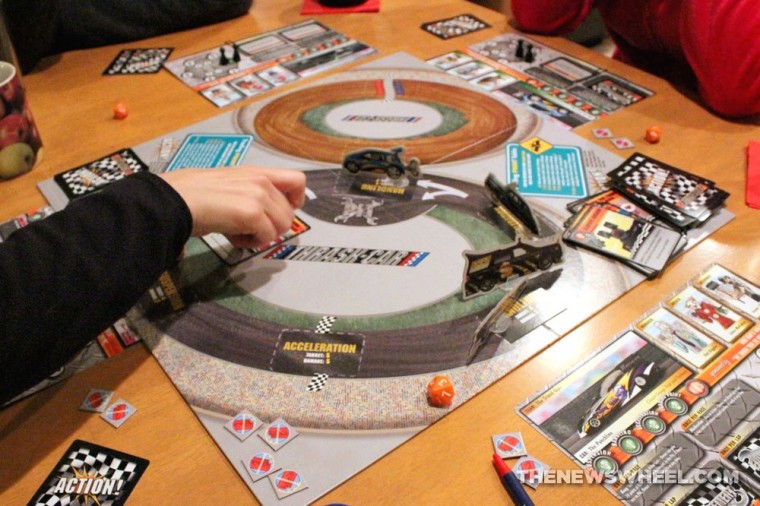 Admittedly, it took us a couple turns to fully understand Thrash-Car, but soon we got the hang of it. The main actions are simple to comprehend, though some of the minor aspects like NOS and using upgrades require more careful attention. 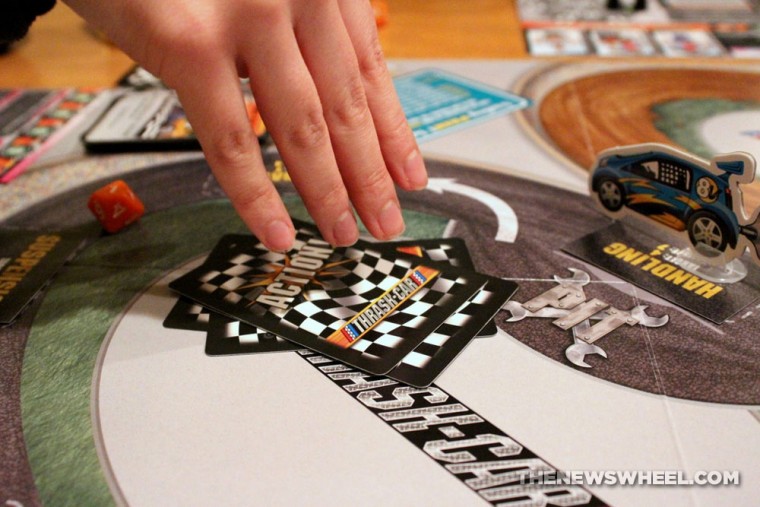 Thrash-Car has many customizable aspects that increase re-play value quite a bit, and make choosing your team first a real benefit. A notable differentiation that Thrash-Car makes from other games is that player are team owners, not just the people behind the wheel. While that idea is interesting, it doesn’t really affect the gameplay that much–you still spend the game moving your car forward or attacking other cars on the track.

If you want a memorable, competitive game that will both entertain and challenge you, check out Thrash-Car. You don’t have to be a gearhead to have a laugh at the stereotypes and exaggerations on the cards (though you might need thicker skin), nor do you have to be an experienced gamer to have fun screwing over your competition.

Thrash-Car is available for purchase through the publisher’s website.