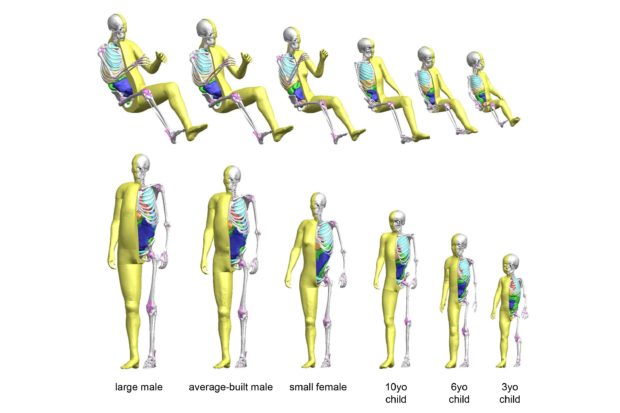 As you might have expected, automakers don’t rely only on physical crash testing to determine the safety of their cars. A far cheaper approach—and one more convenient to test rigorously and with various parameters—is to use computer simulations.

The first version of Toyota’s software was launched in 2000 and has since been steadily updated with improvements. Today, it can simulate faces, bone structure, musculature, reactive internal organs, and even the brain to determine the severity of damage to human bodies. Version 5, launched in 2015, can also make the models brace themselves in much the same way real people might before an imminent collision. In addition, each model has a passenger and pedestrian version so that the impact on humans outside the car can be measured and improved as well.

Thanks to all of these features, THUMS is a popular tool used to develop safety devices like airbags. For example, in NASCAR, the software is used to devise regulations for seat shapes that reduce the likelihood of rib fractures during crashes.

The three children-sized models Toyota is adding join three others already available on the market, including a large male, average-build male, and small female. THUMS is available for purchase by organizations all across the world, including universities and other automakers, to help them contribute to the research of automotive safety.