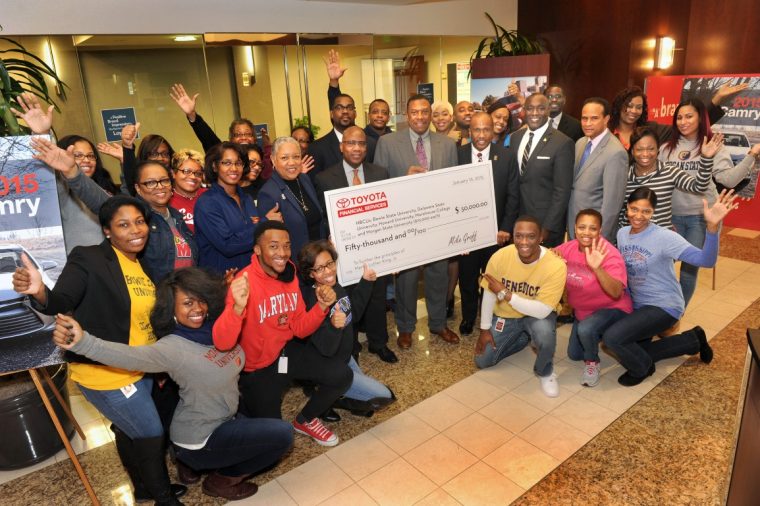 The recipients of 2015’s donation gather to receive their checks

Each year, the US celebrates the birthday of civil rights activist Martin Luther King with a federal holiday on the third Monday in January. Nearly 50 years have passed since King’s assassination, but his message remains important. Last year, Toyota Financial Services began donating to Historically Black Colleges and Universities (HBCUs) in honor of King’s life and vision, and the automaker has announced its second annual donation to coincide with MLK Day 2016.

“Toyota Financial Services is honored to echo the dream of Martin Luther King, Jr., by supporting these fine institutions and advocating higher education in these communities,” extrapolated Al Smith, TFS Group Vice President, Service Operations and Corporate Planning.  “TFS has a deeply held commitment to diversity and inclusion, not only now, but year round as seen with our national Making Life Easier Scholarship Program and with our 10th anniversary of supporting the CBS Baltimore Black History Month Oratory Contest.”

Overall, Toyota will donate $60,000 to five HCBUs. The universities include Bennett College in North Carolina, Tuskagee University in Alabama, South Carolina State University, Wiley College in Texas, and North Carolina Central. The first three colleges will each receive $10,000 to support their scholarship funds, while the latter two will each receive a $10,000 scholarship through the Tom Joyner Foundation. Additionally, the automaker will donate an extra $10,000 to the Tom Joyner Foundation, which provides scholarships, academic support, and programming to more than 80 HCBUs in the Southern and Eastern US.

“We’re really excited to work with our new partner Toyota Financial Services,” vocalized Thomas Joyner, Jr., President and CEO of the Foundation.  “The support of these scholarships is a really important step in helping these students complete their college education and, in the long run, help sustain these HBCUs.”