Gone are the days when vehicles were powered only by either gasoline or diesel. Today’s cars are available with many choices—from electric power to emerging technologies like hydrogen fuel cells. Another trend we have seen concerns vehicles which run on random things such as beer and, well, poop.

In fact, one poop-powered vehicle from Reading, England—the Bus Hound—recently set a new record. The bus, which runs on biomethane compressed natural gas (read: cow poop and other such things), set a brand new land speed record for a bus of an incredible 76.785 mph at Millbrook Proving Ground in Bedford. Unfortunately, this record won’t appear in the Guinness Book of World Records since the recorded speed was less than 150 mph. 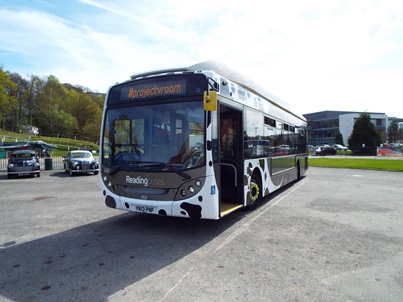 The bus is painted black and white like a Friesian cow, and is used to transport commuters in the Berkshire town of Reading. The bus gets its fuel through a process known as anaerobic digestion, which uses animal waste to produce, and then liquefy, biogas. This liquefied gas is stored in a total of seven tanks which sit inside the roof of the bus.

With the success of the cow poop bus in the UK and Toyota’s fuel cell bus in Japan, could these alternative fuels be the future of public transportation?