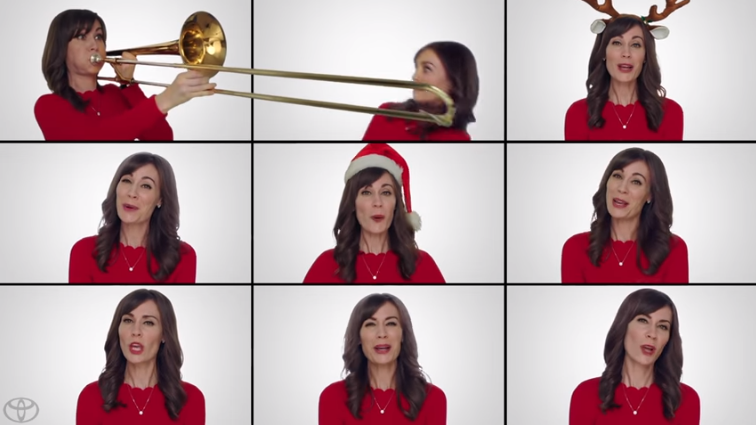 We’re huge fans of Toyota Jan, AKA Laurel Coppock, here at The News Wheel. So you can imagine our excitement when we saw that Toyota had released a trio of new Jan commercials to advertise its Toyotathon year-end sales event.

Toyota released three separate Jan commercials for Toyotathon at the beginning of December—Jancapella, ToyotaCare, and Hourglass.

Celebrate the Season: Tips for decorating your car this Christmas

This commercial is, without a doubt, the most unique of the trio. It features nine separate Jans singing about Toyotathon to the tune of “Carol of the Bells”—one of the most easily recognizable Christmas tunes. Not only do we get to learn about the existence of Toyota’s sales event, but we also get to learn that Laurel Coppock can hold a tune. Who knew?!

Of course, the haters in the YouTube comments only noticed one thing in this commercial—Jan’s eyebrow seemingly falling off at the end of the clip. In reality, it looks like her eyebrow is hidden under her bangs and her hair is making it look like her eyebrow is hanging off her face, though you’d think someone at Toyota would have noticed this and re-filmed the scene before unleashing it to the internet (and Reddit, which found the eyebrow fail in the first place).

The second commercial, Toyotathon, is much less controversial than the Jancapella/eyebrow debacle. Here, Jan tells us that Toyotathon is happening and that all vehicles sold include two years of no-cost maintenance through the ToyotaCare program. Then some voiceover dude tells us the details of the sales event, which is kind of boring but also necessary.

In the third and final commercial, Jan stands in a crowded dealership with a gigantic hourglass, telling us that the last days of Toyotathon are here (even though the event runs until January 2 and the video was published on December 5, so not really). She mentions some of Toyota’s models that are included in the sales event, such as the RAV4, Corolla, and Camry. The commercial ends with Jan walking up to the hourglass, which is just regular sized but closer to the camera than Jan. Perspective, people.